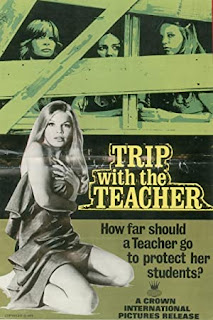 Trip With the Teacher is a Crown International release in 1975 so you know it will be low-budget, somewhat trashy and probably quite entertaining.

Miss Tenny (Brenda Fogarty) is a schoolteacher who’s taking four teenaged girls on a camping trip in the desert. They’ll be looking at stuff like archaeological sites. The girls are much more interested in boys and it doesn’t seem likely they’ll find many of them in the desert. They’re in a school bus, driven by the good-natured Marvin (Jack Driscoll).

The bus is being followed by three guys on motorcycles. Jay (Robert Gribben) is a nice enough guy. He turns out to be the closest thing this movie has to a hero. He only met the other two guys a short while back. Pete (Robert Porter) seems a bit wild and maybe a tiny bit unstable. It’s Pete’s brother Al (Zalman King) who is the worrying one. We very quickly find out that Al is crazy and mean and evil, and totally unpredictable. An old guy as a gas station spills petrol on Al’s bike. So Al kills him. Al is that kind of guy.

The bus breaks down and the three guys on the bikes stop. Whether they’ve stopped to help is another matter.

Marvin can’t fix the bus. Of course that should be no problem. When the three bikers reach the next town they can phone for someone to come out to help Marvin with the bus. Al says they’re prepared to make the call, on one condition. He wants one of the girls to ride off into the desert with him. 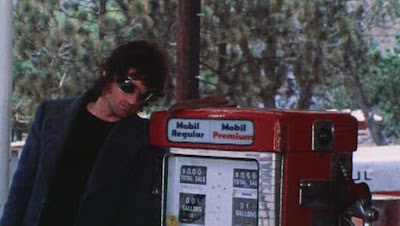 The girl in question thinks it’s a great idea. As soon as the girls spotted the bikers they went totally man-crazy. But Miss Tenny is not about to let any of the girls in her charge ride off into the desert with some strange guy on a motorcycle, especially a guy as disturbing as Al. If Miss Tenny knew that Al had just committed a brutal murder she’d be even more worried.

Things start to get nasty. Al commits another murder. He doesn’t want any witnesses left around, and Miss Tenny and her schoolgirls were all witnesses. They all end up in an isolated shack. Miss Tenny and her girls are prisoners. We’re not sure exactly what Al’s intentions are because he’s so crazy and unpredictable but it’s certainly possible that he intends to kill all the women. It’s highly likely he intends to do other things to them first. 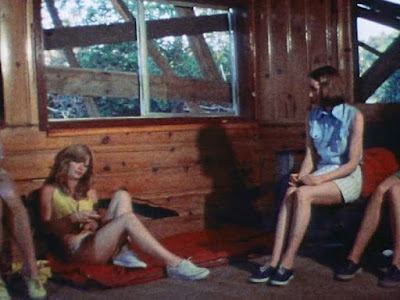 By now we’ve figured out that Pete pretty much does what his brother tells him to do. He probably wouldn’t be actively evil on his own but under Al’s influence he’s dangerous.

A night of horror follows for the women.

There seems to be no escape. Offering any kind of resistance just makes Al crazier and meaner.

It’s a pretty nasty movie that today still packs quite a punch. There’s no gore and not a great deal of nudity. The violence is mostly not graphic but it’s very intense and at times quite shocking. 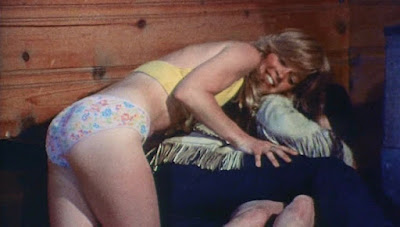 Earl Barton was a dancer who appeared in a few movies in the 50s. This was his only feature film as a writer-director and that’s a pity. He knew how to build suspense and he knew to create an atmosphere of paranoia and terror. He also understood pacing. The movie starts slow but the pace gradually picks up and leads to an exciting and tense finish. Why didn’t this guy get to make more movies?

The big drawcard here for cult movie fans has to be the presence of Zalman King. He was a bad actor, but he was a truly great bad actor. He is always fun to watch and he’s in top form here, playing Al as a guy who could explode into violence and madness at any moment. King goes outrageously over-the-top and makes this movie seriously menacing.

Robert Porter as Pete is overshadowed by Zalman King but he gives a fine creepy performance. 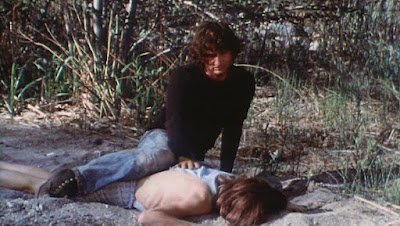 Brenda Fogarty is very solid as Miss Tenny, giving the character just a bit of depth. The actresses playing the girls are all pretty good as well.

This movie is included in Mill Creek's Drive-In Cult Classics 32 Movie Collection, a DVD set which includes interesting oddities such as Pick-Up (1975) as well as drive-in titillation like The Babysitter (1969). Lots of fun sleaze in this set. I believe that Trip With the Teacher has been released on Blu-Ray by Vinegar Syndrome.

Trip With the Teacher is very much a drive-in exploitation movie but despite the low budget it’s very well-crafted and genuinely harrowing. It’s one of those movies that turns out to be a whole lot better than you’re expecting it to be. Highly recommended.
Posted by dfordoom at 02:08