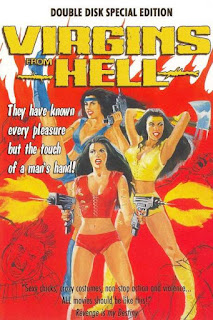 Virgins from Hell (Perawan di Sarang Sindikat) is a 1987 Indonesian exploitation movie. That means you can be sure of two things - it’s going to be totally nuts and it’s going to be hugely entertaining.

To make a successful movie you need the right ingredients. Girls are a good start. Preferably lots of girls. But that’s not enough. So you put the girls on motorcycles. Things are looking more promising now but wouldn’t it be even cooler to give the girls guns? Now you have a surefire box-office winner but just to make sure you put the girls in skimpy costumes. Now you have a formula that just can’t fail.

Of course it also helps if your lead actress is a total babe who looks like just the sort of girl you’d find riding a motorbike wearing a skimpy costume and toting a gun. Enny Beatrice fulfils all these requirements.

In case you thought this movie wasn’t already awesome enough this was the 80s so the girls have big hair and a liking for spandex.

You do need some kind of plot. Virgins from Hell has a plot. It isn’t very coherent and it doesn’t make a huge amount of sense but it’s enough to justify the whole Chicks on Bikes With Guns thing. Two sisters have formed a gang of motorcycle-riding girls in order to get revenge on the drug baron who murdered their family.

The sisters are Sheila (Enny Beatrice) and Karen (Yenny Farida). The drug baron is Mr Tiger (Dicky Zulkarnaen). Mr Tiger has turned the girls’ family home into the headquarters of his drugs operation.

The sisters came from a fairly wealthy family so the family home and estate are big enough to suit Mr Tiger’s purposes and he’s also built an underground complex.

The sisters plan an all-out assault on Mr Tiger’s headquarters. They’re not so much a girl motorcycle gang as a girl army. Armed with automatic weapons.

Early on this movie has a slight Russ Meyer vibe, like a South-East Asian riff on Faster, Pussycat! Kill! Kill! That’s the early action movie part of Virgins from Hell. Then it changes gears and becomes a species of women-in-prison movie except the girls are not in a prion but confined in Mr Tiger’s dungeon. Actually the closest thing in tone to this movie would be some of the 1970s Japanese pinky violence movies.

It does tick a lot of the women-in-prison movies boxes. There’s brutality, the girls get raped a lot, there’s a sadistic lesbian prison warder equivalent (she’s Mr Tiger’s chief henchwoman). They do come up with some original tortures - the barbed wire torture, the mongoose torture (yes, with an actual mongoose) and the barbecue torture.

Indonesia is a predominantly Muslim country so censorship there was pretty strict there in the 80s. There’s no nudity (although the girls’ costumes are very revealing) and the sex scenes are rather tame (yes there are sex scenes). Despite all this it manages to be quite sexy and it has plenty of sleaze and perversity. And some very attractive actresses who look good wearing very little clothing.

While Mr Tiger might be a drug lord this is more a mad scientist movie than a crime movie. Mr Tiger has invented the ultimate aphrodisiac drug which turns women into raging nymphomaniacs. This is going to make him rich on a scale that a mere drug lord could not dream of.

Mr Tiger is a fine super-villain. He’s merciless, he’s sadistic, he’s a megalomaniac, he has a lot of issues with women and he’s completely crazy. He’s more like a Bond villain than a mere crime boss.Dicky Zulkarnaen gives a memorable performance.

Ackyl Anwari directed thirteen movies all of which sound like fun. He knows how to handle actions scenes reasonably well, including some fairly large-scale pitched battles between the motorcycle girls and Mr Tiger’s private army.

The budget was undoubtedly ridiculously small but that never worried the makers of Indonesian exploitation movies. They just did the best they could and the results were usually quite impressive. One of the girls even wrestles a crocodile. There’s some gore. The makeup/prosthetics effects are competent. There are lots and lots of explosions.

Apart from its other virtues Virgins from Hell has a delightfully unhinged flavour to it. There’s no shortage of wtf moments. It’s a movie that makes no concessions whatsoever to realism.

Mondo Macabro released this one as a two-disc DVD package loaded with extras and happily it seems to be still in print. The anamorphic transfer is lovely with nice rich colours. There are plenty of extras, the highlight being a fine documentary on Indonesian cult cinema (the same one that’s included on a couple of other Mondo Macabro Indonesian cult releases but if you haven’t seen it it’s worthwhile) and a brief but informative essay by Pete Tombs on the history of the women-in-prison movie genre going back to 1922.