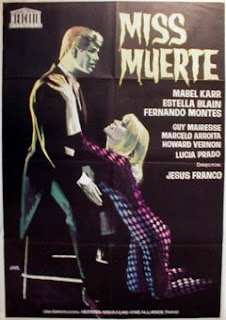 Jess Franco’s 1966 The Diabolical Dr Z was remade a few years later, by the same director, as a Soledad Miranda vehicle under the title She Killed in Ecstasy. Most people seem to think the earlier version is the better of the two but I actually prefer the remake, which has more of the trippiness and weirdness and over-the-topness that I look for in a Franco film. That’s not to say that The Diabolical Dr Z isn’t a terrific little movie though.

A brilliant but obsessive scientist, Dr Zimmer, is working on isolating the parts of the brain that control good and evil. At a scientific conference he suggests that the research is so promising that it’s time to start trials on human subjects. As a result he is branded as a madman and accused of being no better than a Dr Mengele, and the shock of having his researches forcibly terminated by the international scientific community kills him.

His devoted daughter Irma sets out to take revenge on the scientists whom she blames for her father’s death. She forcibly enlists the help of a condemned criminal and of a night-club entertainer, a beautiful young woman who performs in an outrageous spider costume under the name Miss Muerte (Miss Death), who is transformed into an instrument of vengeance who kills with her incredibly long poisoned fingernails. The machine Dr Zimmer designed to gain control over the minds of his experimental subjects is one of the great cinematic mad scientist gizmos, with long articulated spider arms that hold the person in place.

Miss Muerte’s kinky stage act is another highlight of the movie. Estella Blain is terrific as Miss Muerte, stealing every scene she appears in. Daniel White provides a great jazz-influenced score. This is an excellent example of early Jess Franco, with a much stronger and more conventional narrative compared to his later films, although (to my way of thinking) it lacks the outrageous exuberance of 70s Franco. It’s still a wonderfully entertaining piece of eurohorror.
Posted by dfordoom at 22:04