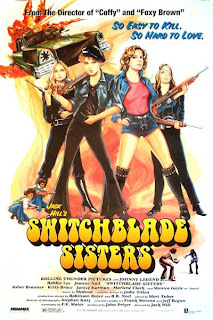 Switchblade Sisters pretty much marked the end of Jack Hill’s directing career, and it’s not difficult to see why. It’s the sort of movie that would have left mid-1970s drive-in audiences somewhat bewildered. It’s a very strange film.

The Dagger Debs are the female chapter of a male gang, the Silver Daggers. Their leader, Lace, is the girlfriend of Dominic, chieftain of the Silver Daggers. Things get complicated when another gang tries to move into their territory, and when new girl Maggie joins. There is immediate rivalry, and sexual jealousy, between Lace and Maggie, and the jealousy is compounded by a series of misunderstandings and is encouraged by one of the other gang girls, Patch. The conflict between the rival gangs escalates into total war, and culminates in an anarchic and rather surreal street battle, and the final dramatic showdown between Lace and Maggie.

The gang members are the usual 30-year-old teenagers you expect to find in an American juvenile delinquent movie. The plot is fairly standard as well. It’s the truly bizarre acting, and the whole tone and rhythm of the movie, that make Switchblade Sisters strange and unusual.

It’s one of the few examples of a movie that really does benefit from a commentary track. In this case the commentary track is provided by Jack Hill himself, along with Quentin Tarantino (Tarantino’s company Rolling Thunder Pictures was responsible for the DVD release). Hill explains two very important points about the movie. Firstly, that the movie is loosely based on Shakespeare’s Othello. Secondly, that he was originally a composer and that he tried to build the movie on a musical rhythm, and to give it an operatic feel. Once you understand those two things, the movie starts to fall into place. The outrageously stylised and theatrical feel of the movie, the deliberate artificiality (Hill avoided location shooting because he preferred the more unreal feel that you get shooting on sound stages and studio backlots), the odd rhythms of the dialogue, the stagey and histrionic acting, all begin to make sense.

In fact, Switchblade Sisters achieves a very operatic feel indeed. Just as in opera, everything is exaggerated, melodramatic, and absolutely excessive. Once you get used to it, it works. There are some spectacular visual set-pieces, including a wild shoot-out in a roller rink (a very effective scene, and it’s amazing to think that such a complex scene was shot in just four hours) and a crazy street battle involving an improvised armoured car and lots of automatic weaponry.

Robbie Lee as Lace gives one of the most off-the-wall performances you’ll ever see. Hill claims he cast her because she reminded him of a female Jimmy Cagney, and that’s exactly what she’s like! Monica Gayle as Patch is also memorable - a classic screen villainess. The movie is completely dominated by the female characters, and they develop more depth than you generally expect in an exploitation film. The way the movie handles gender issues won’t please everybody, but it’s more complex than it seems on the surface.

While I dislike Tarantino’s own films I do respect his enthusiasm for exploitation movies, and his short introduction and his closing piece on the movie, as well as his contribution to the commentary track, are surprisingly useful and informative. And he’s certainly to be commended for making such an odd little movie available to exploitation fans on DVD. Switchblade Sisters is an oddity, but a fascinating oddity. I had misgivings at first, but I ended up being totally hooked by it.
Posted by dfordoom at 12:24