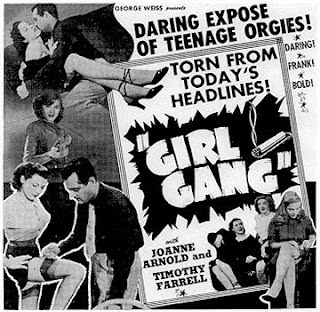 Girl Gang, released on DVD (paired with the wonderful Ed Wood-scripted The Violent Years) by Something Weird, tells the story of a group of kids who get hooked on drugs by a sleazy dope dealer who then forces them to support their habit through prostitution, car theft and armed robbery. It’s your basic 1950s paranoia movie, but combining several popular 50s paranoias.

In 1954 it must have been genuinely shocking, and in fact the very explicit scenes of teenagers (OK, they mostly look like their teenage years are far behind them but they’re supposed to be teenagers) preparing and injecting heroin would possibly cause this one some censorship problems even today. It’s an interesting example of just how much low-budget movie-makers working outside the studio system back in the 50s and early 60s could get away with. It’s also remarkably frank and open on the subject of prostitution, and the casual willingness of these teenagers to trade sex for drugs would (one imagines) have been enough to induce apoplexy in respectable Eisenhower-era Americans. Most outrageous of all is the scene where good-girl-on-the-way-to-going-bad Wanda wants to get into the club where the cool kids hang out. It’s explained to her that the price of admission is for her to have sex with five guys. She’s a little dubious at first, but then decides hey, why not.

I don’t want to give the impression that this movie is actually a god movie. In fact it’s a terrible movie. It’s atrocious. Director Robert C. Dertano possesses all the technical skill of Ed Wood, with none of the flair. When it comes to developing dramatic tension, to pacing, to setting up shots in an interesting manner, he simply hasn’t a clue. The action stops completely several times for some particularly clumsy exposition. The dialogue is painful. The acting would be lucky to make the grade in a high school play. In spite of all this Girl Gang is great entertainment. Timothy Farrell plays the drug dealer like a pantomime villain. And Joanne Arnold as the most wicked and immoral of the bad girls is magnificent, and establishes herself as one of the all-time great movie bad girls. And one of the all-time great bad actresses. I’m totally in love with her.

The strange feeling I get from a lot of the American exploitation movies of that era is that on the surface they're subscribing to the conventional moral values of the period, which they had to do in order not to get banned, but that they actually contain a deliberately subversive subtext for the benefit of those in the know. Look at the fate of June (Joanne Arnold) - after she becomes a junkie and is forced into prostitution she looks just as healthy as she did before, she seems happier, she's definitely having more fun,and all in all she appears to be having a ball. I can imagine if I'd been a teenage girl in the 50s watching that movie, I'd have been saying to myself - wow, I want to be just like her! She's sexy and glamorous and popular, that must be what happens when you become a drug addict and a hooker.

If this type of movie is your thing (and it’s definitely my thing) then you need to see this one, and with the double-movie pack including The Violent Years as well (and some shorts) there’s plenty of entertainment value. They’re two of the most outrageously entertaining exploitation movies you’ll ever see, and I can’t recommend this set too highly.
Posted by dfordoom at 17:50