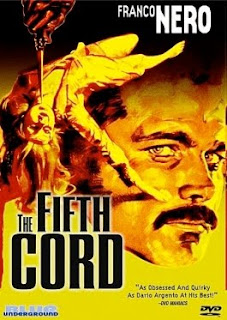 The Fifth Cord (Giornata nera per l'ariete) is an interesting entry in the 1971s Italian giallo cycle, depending even more heavily on style than most films of this type. And style it certainly has in abundance.

The plot has the usual rather bizarre twists and turns you expect in this genre. Franco Nero is Andrea Bild, a journalist who has crawled inside a bottle after a marriage break-up. He’s still somewhat obsessed with his ex-wife, and he’s involved in a moderately destructive relationship with a woman named Lu. His excessive jealousies are clearly going to destroy that relationship, while his drinking combined with his natural tendencies towards being a trouble-maker mean that his job is usually hanging by a thread.

His life becomes more complicated when a young man is brutally bashed after attending a party, at which Andrea was one of the guests, and apparently the last person to see the victim before the bashing. But his life is going to get a lot more complicated. A wealthy doctor’s wife is murdered, and Andrea knew the wife slightly while the doctor is a major shareholder in the paper he works for. More murders follow, one of the victims being his editor with whom he’d quarreled violently. There always seems to be some link to Andrea. And he never has an alibi.

The police are naturally intrigued by the fact that Andrea has a connection with all the murder victims. Andrea is naturally anxious to solve this puzzling case both to clear his own name and because it’s obviously going to make a good story.

The movie has most of the classic giallo elements, including the black gloved killer. The sexual dimension isn’t as obvious as in most giallos. There is a sexual dimension, but most of 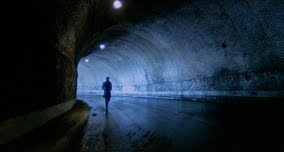 the killings are not obvious sex killings. The script is workmanlike, although the connections between the various characters aren’t really delineated as clearly as one would like.

Franco Nero gives a typically understated but solid performance as Andrea. Rosella Falk is outstanding in a fairly minor role as the doctor’s wife, Wolfgang Preiss is the police inspector, the kind of role he specialised in and always did extremely well. Pamela Tiffin as Andrea’s girlfriend is impressive.

The real star of the movie though is cinematographer Vittorio Storaro. He’d worked with Bernardo Bertolucci and he’d photographed The Bird with the Crystal Plumage for Dario Argento, and he’s since gone on to pick up three cinematography Oscars. He and director Luigi Bazzoni give this movie a very film noir visual feel. Storaro does shadows better than anyone else I can think of, with the possible exception of master film noir cinematographers John Alton and Nick Musuraca. Ad they had the advantage of worki 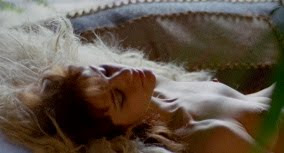 ng in black-and-white - I don’t think anyone has used shadows more effectively and more moodily in colour than Stararo does in this film.

The sets are also superb - Bazzoni makes tremendous use of modernist architecture and interior design to give the movie both style and mood.

While the plot is nothing special, this is a movie worth seeing just for its technical mastery and its breath-taking visuals. In that respect I think it even outdoes Argento at his best. Every visual element is there for a reason, and works perfectly, but the movie never seems gimmicky. Strangely enough, for a giallo, the most impressive visuals aren’t reserved 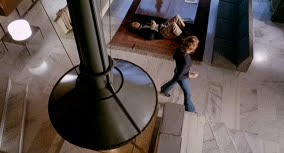 for the murders (apart from the murder of the doctor’s wife which is a stunning set-piece). Bazzoni and Storaro use disturbing images to build mood and tension rather than for spectacular individual scenes of action or violence. The entire movie works as a single visual entity.

So what could have been a routine giallo is executed with so much flair that it becomes a must-see.

Blue Underground’s DVD release includes only one significant extra, a 16-minute featurette in which Franco Nero and Vittorio Storaro discuss both the movie and their careers. But the transfer is superb, and that’s what matters with a movie such as this.
Posted by dfordoom at 01:31