Pam Grier is Foxy Brown, a smart woman with plenty of attitude and confidence but some real problems. Her biggest problem is her loser of a brother. It’s not just that he’s an habitual criminal, he’s also the world’s most unsuccessful criminal. Foxy has to get him out of one jam after another.

Her other problem is her boyfriend. He’s a nice guy and they’re totally in love, but he’s also an undercover federal narcotics cop with a price on his head. At the moment the bad guys think he’s dead, and he’s had plastic surgery to change his appearance. It was a good plan, and it might have worked except for Foxy’s low-life brother. He has no morals, but he has a naturally suspicious mind, and he notices that Foxy’s new boyfriend Michael reminds him vaguely of the old undercover cop one. And he senses that this insight could be worth some money to him.

Pretty soon Foxy finds herself going up against the big drug boss, a beautiful but exceptionally ruthless white woman. This crime ring also runs a stable of high-class call-girls, but their job is not to take money for the organisation but to provide sexual favou 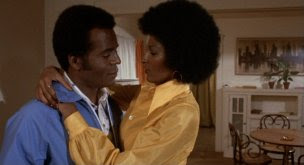 rs to powerful judges, law-makers, politicians, cops, etc. This is the reason the police have found it so difficult to get convictions against members of this organisation. Foxy decides to apply for a job as a call-girl. Given her glamour and her spectacular figure she has no problems getting in. She and another girl are sent out on an assignment to keep a judge happy. He likes black girls, and being provided with two beautiful black girls should certainly keep him onside. The other hooker, Claudia, turns out to be less than happy with her employees and she’s also a rather feisty lady so she’s happy to help Foxy bring down the evil crime queen.

There’s the usual mix of action with a touch of camp that you expect from Jack Hill. The violence isn’t 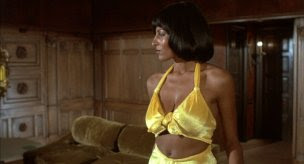 graphic, but it’s done with style. There’s some nudity, but not much. Pam Grier takes her clothes off less often than usual. There’s outrageous 1970s interior design and fashions, and lots of afros.

Pam Grier was so good in these types of movies because she was more than just a hot body combined with kickass attitude. She has a basic likeability so you always want to see her get the better of the bad guys.

The plot is fairly silly, but in an exploitation movie that’s more likely to be an advantage than otherwise. The main thing is it’s an adrenaline-charged 90 minutes of entertainment with style, and it never makes the mistake of taking itself seriously. 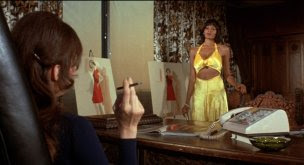 m Grier then Coffy is probably a better place to start, but Foxy Brown is fun in its own right. It’s also great to see a movie in which a black woman requires no help from the men in her life in order to sort out her problems, and their problems as well. And she does this with a mix of kickass attitude, intelligence and guts.

The Region 2 DVD is what you expect from MGM. The movie looks good, but there’s a shameful lack of extras. But if you shop around you can pick this one up very cheaply indeed.
Posted by dfordoom at 02:43