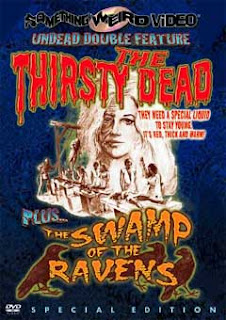 The Thirsty Dead is a 1973 US-Philippines co-production and it’s released on DVD by Something Weird, so what you naturally expect is a hefty dose of sex and sleaze. What you actually get is something quite different, and much stranger.

The alternative title, The Blood Cult of Shangri-La, is the clue. Yes, this is a remake of Lost Horizon. Well, a really really loose remake! Somewhere in the mountains of the Philippines is a lost civilisation of immortals. Their culture is dedicated to the worship of your and beauty. To obtain and maintain their immortality they need a constant supply of the blood of young and beautiful women. They kidnap women from bars and similar places. Their latest haul of four captive women includes an American stewardess and a dancer.

The stewardess turns out to bear an uncanny resemblance to a painting of an important high priestess, so the cultists decide she’s some kind of reincarnation of the priestess and therefore worthy to become one of the immortals. She’s not thrilled by this idea, since she’s going to have to drink the blood of her friends. And she’s seen what happens to the women whose blood is taken by the cultists. The dancer on the other hand would just love to join the cult, and doesn’t see blood drinking as a major problem if you get eternal youth and beauty in exchange.

Meanwhile one of the chief priests has become smitten with the stewardess. He agrees to save her and her friends, although this is go 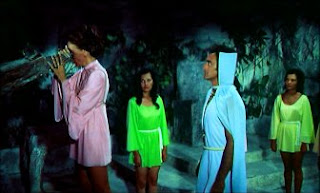 ing to put him very much in the bad books with the current high priestess. And she’s not a lady you want to upset.

There are a few moderately gruesome scenes, but this is not really a movie you can take seriously as a horror film. This is strictly an exercise in camp. I would assume it was intended as such, but with low-budget 1970s movies you can never be quite sure!

There’s absolutely no sex, no nudity, and no sleaze. But there’s lots of weirdness. And it’s about as camp as a movie can possibly be. The costumes are classics 70s kitsch. The sets are cheap and crude.

The acting is atrocious, but it’s classic bad movie atrocious acting. Jennifer Billingsley has one expression, which is stunned confusion, but she does it so well. And in every situation. Her performance is immensely entertaining if you’re a connoisseur of truly awful acting. John Considine is delightfully hammy as the priest Baru. Judith McConnell as the sex-crazed dancer and Fredricka Meyers as the annoyingly innocent and wide-eyed Ann deliver charmingly inept performances, 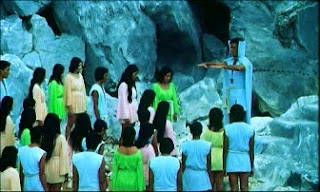 There’s not much to say about the technical side - it’s adequate for this kind of ultra-low budget drive-in fodder. The running time of less than 90 minutes ensures that you’re in no danger of becoming bored, and there’s so much kitschiness to keep you entertained along the way.

Something Weird’s DVD presentation is pretty reasonable considering the extreme obscurity of the movie, and it’s included as a double-feature along with the even more obscure 1974 horror flick Swamp of the Ravens (which I’ve yet to see).

This is a definite camp classic, and I need hardly add that I throughly enjoyed it.
Posted by dfordoom at 22:06