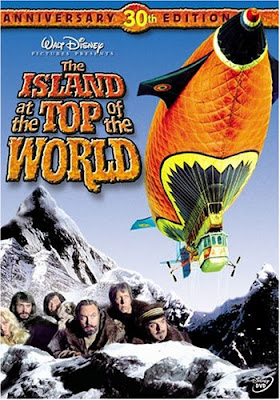 You could describe this one as an attempt to get a Jules Verne feel although it’s not actually based on a Verne novel.

It is the first decade of the 20th century. Wealthy business Sir Anthony Ross (Donald Sinden) had quarreled with his son Donald, and Donald as a result had set off on his own to explore the world. Specifically, to explore the Arctic regions. And had promptly disappeared. Now his father is determined to find him.

He recruits a somewhat sceptical anthropologist, Professor Ivarrson (David Hartman), who had led several expeditions to the Arctic. Ivarrson explains that it’s too late in the season to set out now, but Ross assures him that’s no problem. They won’t be using dog sleds or anything primitive like that. They’ll be going by airship!

Captain Brieux is the French engineer responsible for designing and constructing the airship Hyperion, and he is also its command 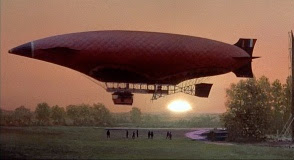 er and pilot. He’s initially reluctant but since Sir Anthony Ross has financed his airship research and is in fact the owner of the Hyperion he doesn’t have much choice. Of course being a Disney movie there has to be a cute animal, in this case the gallant captain’s poodle. The captain would not even consider leaving her behind.

After finding the Eskimo guide who had accompanied his son in his explorations they set out in the Hyperion for the mythical Island of the Whales, the place where the whales go to die. It appears that the island isn’t so mythical at all. It exists, and it’s a rather su 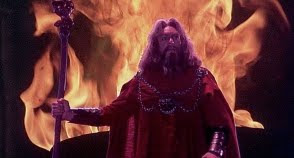 rprising place. It is heated by hot springs and all manner of volcanic phenomena so that in spite of being so far north it’s quite fertile. It is a true lost world. But the Hyperion’s crew were not the first to find this fabled island. The Vikings beat them to it by a thousand years. And the Vikings are still there!

The Vikings are initially friendly enough, until their high priest the Godi decides that the airship is a sign that an ancient prophecy is about to be fulfilled, that their land is to be menaced by savage invaders. The fact that the invade 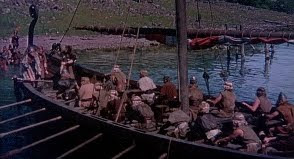 rs comprise a middle-aged businessman, an enthusiastic but entirely harmless scientist, an eccentric French engineer and one small dog has no effect on the Godi’s certainty that these dangerous invaders must be destroyed.

Some of the Vikings are however extremely friendly, and remain so. Donald has been living peacefully with a Viking farming family and he has fallen in love with the beautiful blonde daughter of the family, Freyja.

The plot provides plenty of action, with our adventurers chased by Viking lon 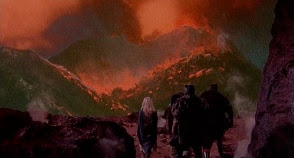 gships as well as various aerial mishaps. It’s very much a kids’ movie but it’s still highly entertaining and adults with a yen for zeppelins and Vikings will have no cause for complaint.

There are no big name stars but Donald Sinden rises to the occasion in splendid style and overacts his heart out. Captain Brieux is a stereotypical movie Frenchman, excitable but brave. The other cast members are quite adequate.
The special effects are extremely variable. Some are excellent, some are very iffy. It doesn’t really matter. Even the dubious effects don’t spoil the fun. And the longships and the zeppelin are terrific, and that’s what matters.

Disney’s Region 4 DVd is a little disappointing. Picture quality is not fantastic and there are zero extras.

An enjoyable adventure romp.
Posted by dfordoom at 01:05