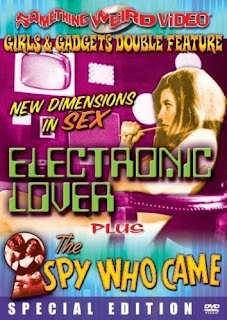 The Spy Who Came is one of a fairly small number of 1960s American sexploitation movies that combined sexploitation with science fiction. And it’s probably the most entertaining movie in this rather specialised sub-genre.
Harry, a hardbitten vice cop who is just a little too fond of the ladies, finds himself the victim of blackmail after he picks up a very strange blonde girl in a bar. She seems almost like a zombie but she’s extremely willing to go to bed with him. Now the cop is in the clutches of an Arab terrorist who specialises in the espionage technique of the honey trap - using sex and subsequent blackmail to recruit agents.
What Harry doesn’t know but is about to find out is that Interpol is investigating this terorist/espionage ring and knows all about his involvement. Harry is offered a choice - turn double agent and cooperate with Interpol or face the music. 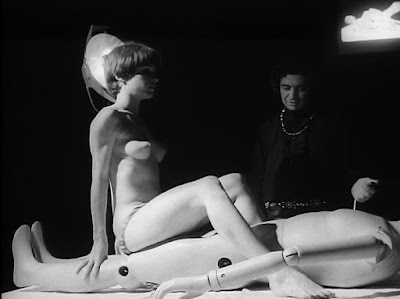 Not surprisingly Harry agrees to the deal. When he returns to the spy ring’s headquarters he’s accompanied by an Interpol inspector. While Harry keeps the spies busy the inspector will sneak around and take photos. The inspector uncovers the whole outrageous plan whereby young women are programmed by drugs and electronic brainwashing to become willing sex slaves for the spy ring.
The programming is supervised by the beautiful blonde lesbian Tessie. Tessie enjoys her work. Especially the parts of her job that involve naked women and the use of whips. 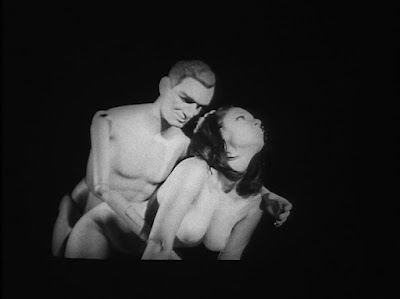 The whole thing is played for laughs and is surprisingly successful. And it’s actually funny. It’s also, as you’d expect from a movie rescued from obscurity by Something Weird Video, utterly bizarre. The female sex slaves are trained by having simulated sex with department story dummies. They use the dummies to rehearse the various sex positions they will need to learn.These scenes really are wonderfully strange and rather surreal, the more so because the actresses involved play it so straight. Not particularly erotic (unless you have a department story dummy fetish) but weirdly kinky.
There’s more weird kinkiness in Tessie’s training sessions with the girls. Tessie certainly has a few issues she needs to work through. 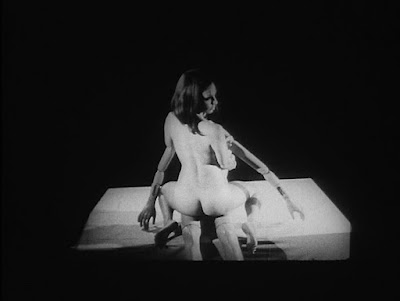 While there’s a huge amount of nudity none of it is very explicit. This is the type of sexploitation movie where women have sex without taking their panties off. It’s actually a great example of the art of sexploitation movie-making - there’s all kinds of implied kinkiness but very little is actually shown. As far as what is actually seen is concerned it would barely merit more than a PG rating today, but it still manages to feel delightfully sleazy and dirty.
The acting is incredibly wooden but the science fiction/spy plot and the general weirdness make this more of an asset than a liability. If you have people who can’t act, have them play the roles of people who’ve been zombie-fied! And it adds nicely to the bizarrerie. The actress who plays Tessie is particularly bad but in a truly wonderful way. She’s just a total hoot. 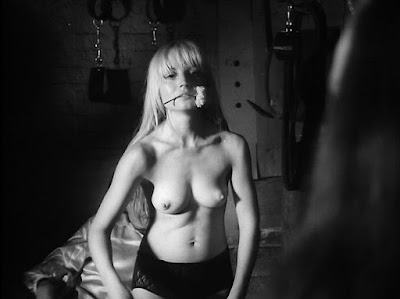 Something Weird have come up with a very fine print of this movie (as they generally manage to do). It’s a double-header with another spy/science fiction/sexploitation feature, The Electronic Lover, which is even stranger although not quite as entertaining.
With Something Weird's usual array of extras this qualifies as a terrific two-movie set for fans of wacked-out 1960s movie oddities.
Posted by dfordoom at 00:27