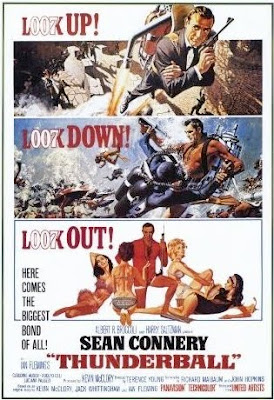 By 1965 James Bond fever was it its height. The steadily increasing commercial success of the series was destined to reach a peak with the fourth film, Thunderball. This was the third and last Bond movie to be directed by Terence Young. As he explained afterwards he had made the first Bond film (Dr No), the best of the Bond films (From Russia With Love) and the most successful (Thunderball).

And it has to be said that all the Bond films Terence Young directed are great fun. Thunderball boasted the biggest budget of the series up to that time and it’s visually impressive. Somehow though it’s not quite as much fun as Goldfinger. In Largo it has a less interesting villain than the earlier films, and although the cast includes no less than three glamorous Bond women none are quite as intriguing as Pussy Galore.

The theft of atomic bomb was one of the staples of 1960s spy movies. In this instance the bombs are stolen from a hi-jacked British Avro Vulcan bomber. The hi-jacking method is ingenious and provides probably the most visually interesting scenes in the

film. As you might expect, SPECTRE is behind this dastardly plot to blackmail the British government.

As so often in this movie series 007 finds himself in the Caribbean, and surrounded by beautiful women. There’s the obligatory casino scene and there’s one of the most large-scale underwater battle scenes you’re ever going to see, a sequence that undoubtedly chewed up a very large slice of the budget. Connery did some of the underwater scenes himself.

There are some gloriously extravagant sets, with the SPECTRE headquarters being particularly impressive. Largo’s huge motor yacht, the Disco Volante, is the sort of vessel every diabolical criminal mastermind dreams of owning.

Interestingly enough the novel Thunderball, published in 1961, was originally a film treatment. Ideas from the film treatment were incorporated by Ian Fleming in the

book (leading to a celebrated court case) so the novel could technically be described as a novelisation. Delays engendered by the court battle meant that this ended up as the fourth Bond film, rather than the first as was originally intended.

Sean Connery was by this time very comfortable indeed in his role as Bond. Luciana Paluzzi, Claudine Auger and Martine Beswick provide the glamour. Adolfo Celli is very god as Largo although the character doesn’t quite have the larger-than-life fe

el of a great Bond villain.

It might sound like I’m damning Thunderball with faint praise but it is in fact a highly entertaining movie. It’s not by any means the best of the Connery Bond movies but any Bond movie with Connery is worth seeing.
Posted by dfordoom at 16:56

As a kid I found FROM RUSSIA WITH LOVE and THUNDERBALL to be among the most boring of the Bond films. But as I grew up their stock began to steadily rise. I still find some of the underwater sequences to be interminable, but fortunately we have John Barry's excellent score (in my opinion the best Bond soundtrack) too bring life to the action sequences.