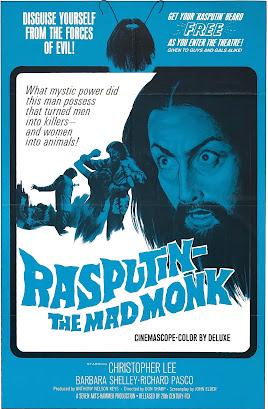 Hammer Films were always wary about becoming too dependent on the gothic horror genre and were keen to release movies in as many different genres as possible. In the 1960s they made science fiction, action adventure movies, prehistoric adventure movies and even a few pirate movies. And they made a few films that are not easy to classify. Among these was Rasputin, the Mad Monk, written by Anthony Hinds and directed by Don Sharp.

This 1966 production, a kind of mishmash of horror and historical adventure/drama, was one of their more interesting films and it features a gloriously overblown but enthralling performance by Christopher Lee in the title rôle. Rasputin, the Mad Monk had a pretty good DVD release a few years back from Anchor Bay. More recently it’s been released on Blu-Ray by Shout! Factory and that seemed to me to be a good excuse to revisit this one.

This is a movie that hits the ground running. In the first few minutes this crazy monk (who is of course Rasputin) wanders into a tavern, cures the landlord’s dying wife of a fever, then after four bottles of wine he beds the landlord’s daughter and gets into a brutal fight. For Rasputin it’s been a gloriously enjoyable evening so he’s happy then to return to his monastery. Rasputin believes that confession is good for the soul, and it’s even better if you can give God some really big sins to forgive.

This kind of behaviour inevitably gets him kicked out of the monastery. Rasputin is jus a peasant from Siberia but he figures if he can to St Petersburg there’ll be lots of opportunities for a man of his immense talents.

You’d think that a peasant and a disgraced monk would have little chance of ingratiating himself into a position of power and influence at the Tsar’s court but that’s just what he proceeds to do. He does this by using those talents. He can hypnotise women into doing pretty much anything so he is able to use sex and his very definite charisma to establish his position, combined with a good deal of cunning. And he really can cure people. It’s probably mostly a matter of hypnosis being effective in curing psychosomatic disorders and in the case of real illnesses his ability to make people believe they’re going to be cured but whatever the explanation he can point to some very important people he has been able to heal. He also has a kind of mystical belief in his own destiny - he never doubts that he is going to end up with almost unlimited power.
He acquires several allies in the persons of Dr Boris Zargo (an alcoholic who was struck off the medical register, played by Richard Pasco) and Sonia (Barbara Shelley), one of the Czarina’s ladies-in-waiting. He has no difficulty in seducing Sonia and her sexual obsession with the crazy monk makes her a very willing and very useful ally.

He also, inevitably, makes enemies. Sonia’s brother Ivan (Francis Matthews), her friend and fellow lady-in-waiting Vanessa (Suzan Farmer) and Vanessa’s brother Peter (Dinsdale Landen) all fall into this category. Eventually they will become very active enemies, determined to bring about his downfall. They believe that if he isn’t stopped he’ll destroy them all and Russia as well.
It has to be said that historical accuracy is not this movie strong point but that’s somewhat unavoidable in historical movies. Complex events have to be simplified and compressed in time and in this case the characters has to changed quite a bit since Prince Felix Yusupov, one of the actual plotters against Rasputin, was making a very comfortable living suing anybody who tried to make a movie about Rasputin.
Rasputin, the Mad Monk was shot back-to-back wth Dracula, Prince of Darkness, using the same sets and many of the same performers - Christopher Lee, Barbara Shelley, Francis Matthews and Suzan Farmer appeared in both movies. Christopher Lee wasn’t overly keen to do another Dracula movie but he was very very keen to play Rasputin so the two movies were more or less offered to him as a package deal.

Christopher Lee gives what I consider to be the performance of his career. His Rasputin is a man of terrifying power and will, utterly ruthless and insanely self-confident. It’s a bravura performance and it works magnificently. Lee had a bit of a personal obsession with Rasputin which probably goes a long way towards explaining the intensity of his performance.
Barbara Shelley is excellent as well. Her Sonia is quite complex. She’s Rasputin’s victim but to some extent she’s a willing victim. She’s your basic decadent aristocrat, very fond of drinking and hanging out in low dives. She’s just waiting for someone to corrupt her even further. Richard Pasco is impressive as Dr Zargo, a man who thinks he has abandoned all morality and finds out that he’s mistaken. Francis Matthews is also pretty  good, and gets one terrific scene which he plays magnificently.
What made Rasputin such suitable material for Hammer was the story’s mythic qualities, with Rasputin being a charismatic figure with almost superhuman mind control abilities. A bit like Dracula. What’s really interesting is that it now seems entirely possible that the popular legend of Rasputin was mostly a myth. I can’t say more without revealing spoilers for the movie.

Don Sharp was a very underrated director and he pulls off a couple of superb and very creepy horror moments. He also knew how to use Christopher Lee’s personal attributes - his height, his commanding presence and, particularly, his eyes. Sharp was convinced that Lee really could hypnotise people and Barbara Shelley was inclined to agree.
The Shout! Factory Blu-Ray looks terrific and it’s packed with extras - a making-of featurette, an intriguing featurette on novelisations of Hammer films, two audio commentaries (one of which features Sir Christopher Lee, Barbara Shelley and other cast members) and two episodes from the World of Hammer TV show.
Rasputin, the Mad Monk is a slightly unusual Hammer film but it succeeds rather well. It’s very well made, the acting is generally extremely good and then there’s Christopher Lee’s extraordinary performance. Highly recommended.
Posted by dfordoom at 03:08