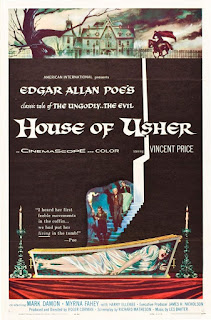 The Fall of the House of Usher (sometimes referred to simply as The House of Usher), released by American International Pictures in 1960, is not just a very good horror movie it’s a very important one. It launched Roger Corman’s Edgar Allan Poe cycle, one of the most significant horror movie cycles of all time. It also established Vincent Price as one of the great horror icons.

Although this film has some obvious affinities to a haunted house movie it’s actually something quite different. The Usher house is not haunted by ghosts or malevolent spirits but by the tragedy of the Ushers themselves.

Philip Winthrop (Mark Damon) arrives at the oppressively gloomy Usher mansion to see his fiancée Madeline Usher. He is at first refused admittance to the house. He is told that Madeline is too ill to see anyone. Madeline’s brother Roderick Usher (Vincent Price) explains matters to Philip. He cannot marry Madeline. The Usher blood is tainted.

Roderick Usher suffers from a morbid derangement, a distressing over-acuteness, of the senses. He can eat only the blandest food. He is over-sensitive not just to light but to all visual impressions. His hearing is excessively acute and even the slightest sound almost drives him mad. The only sounds he can endure are his own musical compositions, and very strange melodies they are. He is oppressed by odours of all kinds. He tells Philip that Madeline suffers from the same condition. For members of the Usher family there is no escape from this fate which inevitably leads to madness and death. 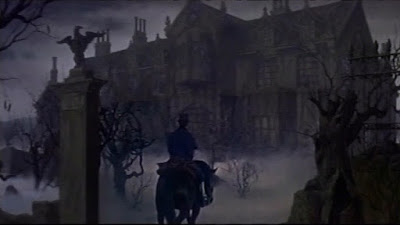 Roderick Usher is most certainly not a monster. He may be insane, or may have been driven insane by his fate, but he is essentially a kind, sensitive, intelligent and deeply cultured man. Which of course makes his suffering all the more poignant. He feels too much.

Roderick tells Philip that he and his sister are dying although Philip assumes that is is just a morbid fancy on the part of Roderick. What does seem certain that the house itself is slowly dying, slowly crumbling.

This is not a horror movie that relies on overt terror. It relies instead on a mood of gloom, despair and decay. It might not have many scares but it has creepiness and dread in abundance. Philip wishes to take Madeline away, believing that he can thereby save her, but he is told that this is impossible. It seems that the Ushers cannot escape their fate.

There are those who see Price’s performance as hammy, but it isn’t. He could be hammy when that was what was required but he was perfectly capable of being subtle. His performance here is exactly what the film needs. It’s certainly bizarre and outrageous, but Roderick Usher is one of the more bizarre characters in fiction. He has to be permanently on the verge of an hysterical breakdown, but never quiet going over the edge. Price knows precisely what he is doing. Usher is also not a monster. He is a deeply tragic doomed figure and we have to feel sympathetic towards him.

There are only three other cast members. Mark Damon as Philip, Myrna Fahey as Madeline and Harry Ellerbe as the aged family retainer Bristol are all pretty good.

This was a fairly low budget movie but compared to the minuscule budgets Corman was used to he had an almost unimaginably vast amount of money at his disposal and if there was one thing at which Corman excelled it was making a limited budget go a very long way.

He also had the advantage of having an extraordinary array of talent available to him on this film - screenwriter Richard Matheson (and horror screenwriters don’t come much better than Matheson), cinematographer Floyd Crosby and production designer Daniel Haller (who went on to direct the very underrated Lovecraftian horror flick The Dunwich Horror). And of course he had Vincent Price as his star. With people of that calibre involved it’s a lot easier to make good movies.

This is not a movie that will satisfy those who demand gore with their horror. This movie is the ultimate in atmospheric horror. It is also a masterpiece of decadence (fittingly, since Poe was a master of both the gothic and the decadent).

Extra interest is added by the fact that the story of the Usher evil comes from Roderick - how much of his story is real and how much is due to his disturbance of mind? Does the evil come from the Ushers, or the house, or from some outside influence. The dream sequences (very effectively done) add to the ambiguity.

Matheson made a few changes to Poe’s story. In Poe’s tale the Philip Winthrop character (he is actually an unnamed narrator) is not Madeline’s fiancé. He and Roderick Usher were school friends many years earlier and Roderick has begged Winthrop to visit him in an attempt to dispel his mood of impending doom.

The old Region 4 DVD which I have is letterboxed but it’s a very nice transfer. There has been a Blu-Ray release from Arrow in the UK, if you can find it.

This movie may not offer geysers of blood but it is an effectively chilling film. It was a major hit for Corman. This and his subsequent Poe films established him as a master of gothic horror. This movie offers more subtle delights than the roughly contemporaneous Hammer gothic horrors. That’s not to say that it’s superior to Hammer’s efforts, merely that Corman had his own distinctive approach.

The Fall of the House of Usher is in its own way quite superb. Very highly recommended.
Posted by dfordoom at 23:58

Another thing the film has for it is actor Mark Damon, one of the Corman regulars, who really does a great job selling this performance as Philip Winthrop, Madeline's fiance. He really is trying to understand exactly what is going on, what madness has gripped Roderick and Madeline. Just a fine performance from an excellent actor.

Another thing the film has for it is actor Mark Damon, one of the Corman regulars, who really does a great job selling this performance as Philip Winthrop