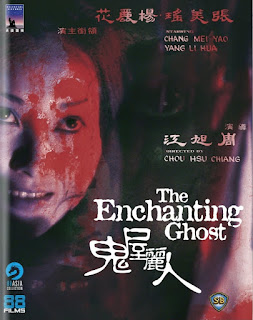 The Enchanting Ghost (Gui wu li ren), directed by Hsu-Chiang Chou, was one of Shaw Brothers Studio’s first forays into supernatural horror. It was released in 1970.

It was based on one of the stories, The Bookworm, in a celebrated collection of supernatural tales called Strange Stories from a Chinese Studio, written by Pu Songling (1640-1715).

Lang Yu Zhu is a young scholar who has just been evicted from the family’s properties because of debts incurred by his late father. In fact he’s been the victim of crooked officials, and his even more crooked uncle.
I should add that, rather confusing, young Master Lang is played by a woman (Li-Hua Yang). I have no idea why. She certainly doesn’t look remotely male. She actually looks like a rather feminine young woman.

Yu Zhu has nowhere to live so he decides to move into the old semi-derelict Xiaolin house even though it’s reputed to be haunted.

Master Lang soon discovers that he’s not alone in the house. There’s a young woman there, named Ruyu (Mei-Yao Chang). Her mother was killed by robbers.

At this point things are looking up for Yu Zhu. Living in a haunted house could be depressing but sharing a haunted house with Ruyu might not be so bad. She’s quite a babe and she obviously likes him.
Yu Zhu is a thoroughly decent, kind and generous young man but he has devoted his life to books and he understands little of the real world. He thinks that books provide the answer to all of life’s problems and it’s his disconnectedness from the sordidness of the real world that is one of the film’s themes. He is a man who needs to find an escape fr0m reality. And perhaps he does.
His excessive bookishness might be an immediate problem. He and Ruyu have fallen in love but he can’t even support himself much less support a wife.

The villagers are soon convinced that Yu Zhu has fallen under the spell of a female ghost, presumably some kind of succubus. They feel they should do something about this but they’re really scared of ghosts and of the Xiaolin house.
Ruyu likes to make herself up as a ghost and this comes in handy when Yu Zhu’s uncle decides to try to kill him (he’s afraid that Yu Zhu is going to take legal steps to regain possession of his stolen property).
If you’re expecting full-blooded horror you might be disappointed. For most if its running time it’s a light-hearted romance with just a few hints of the supernatural. In fact my impression is that we’re not supposed to take this movie too seriously. It’s more of a nice-guy hopeless geek meets cute babe romance with definite comic overtones. I suspect that the casting of a woman as the male hero is part of a joke, which might be clearer if you’ve read the story the film is based on. It’s also quite possible that Yu Zhu’s scholarly obsessions have demasculinised him.

The movie does eventually change gears and takes on a more tragic tone, and the supernatural elements start to kick in.
Early on the ghostly hints are handled in a somewhat jokey manner, with lots of thunder and lightning and ominous creakings and hidden rooms and the full panoply of traditional ghost stories.
Special mention should be made of Fu-Ling Wang’s score - it’s deliciously spooky and over-the-top and reinforces the impression of the film-makers’ lighthearted intentions.
On the surface this movie is an oddly discordant mixture of farce, romance and horror. It’s usually dismissed as very much a lesser Shaw Brothers horror film and as a very lightweight ghost story.

There may however be more to it than the very simple plot would suggest. There are some questions to ponder. Ruyu is not a ghost. Or is she? The house is not really haunted. Or is it? It’s possible that there are no supernatural elements at all. Yu Zhu is after all a young man who lives in a world entirely remote from the real world. It’s possible that all the events take place in his mind. It might be a dream. It’s equally possible that almost everything has a supernatural explanation. Or perhaps Yu Zhu really has been seduced by a ghost. There may be no actual ghosts in the story at all, or lots of ghosts. You might want to take note of when and where the ghosts appear. Does Yu Zhu remain forever in his lofty world of scholarship, cut off from life, almost a living ghost himself, or does he eventually confront the real world? Maybe we should take what we see at face value, and maybe not. And what does the ending mean?
The Blu-Ray release from 88 Films provides an extremely good anamorphic transfer (the film was of course shot in ShawScope).
Maybe this movie is just a curio, an attempt at a ghost story that misfired, or maybe it’s a lot more subtle. Either way it’s worth a look.
Posted by dfordoom at 17:15