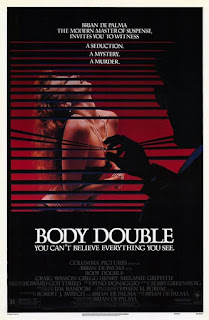 Body Double is a Brian de Palma movie that has divided critics and audiences since its release in 1984, but then Brian de Palma is a director who has tended to have that effect.

Jake Scully (Craig Wasson) is a struggling actor who has a minor problem. He’s playing the vampire in a low-budget horror film but he gets claustrophobic when he gets sealed in his coffin. When he gets home from the studio he finds he has an even bigger problem - his girlfriend is in bed with another man. And her face is glowing. He wouldn’t have minded quite so much if her face hadn’t been glowing.

So now he has no job and no girlfriend. Then he gets a lucky break. Another struggling actor, Sam (Gregg Henry), offers him a sub-let on a luxury modernist house. It’s a house that has everything. And there’s an added bonus. There’s a powerful telescope and every night, as regular as clockwork, a beautiful female neighbour does a strip-tease in front of her window. Naturally Jake makes sure not to miss the nightly show.

Then he sees something odd and slightly disturbing happen in the young lady’s apartment.

Jake becomes obsessed. He starts following the woman. Maybe he always had voyeuristic tendencies or maybe it’s just the thing with his girlfriend hitting him hard at this time. Maybe he’s just trying to distract himself. There is obviously some sexual element to the obsession - he does steal a pair of her freshly discarded panties. 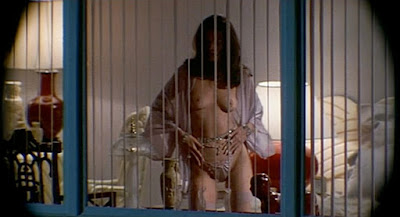 There’s also a weird-looking guy following the young woman. There’s a great scene is a shopping mall elevator - it’s very tense even though at this stage there’s no reason to think that anybody is in any danger or that anything at all sinister is going on. It’s a tense scene because Jake is so tense. It’s as if he’s convinced himself that something is about to happen. And of course we know he suffers from claustrophobia.

Then there’s the murder, which Jake witnesses but can’t prevent. A terrible tragedy but to Jake it’s more than that. There’s something very wrong and he’s starting to get a glimmer of what it might be. 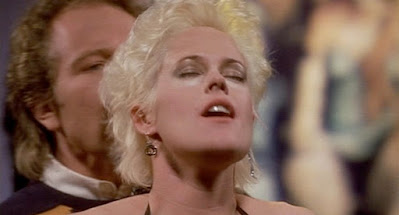 You can’t mention de Palma without mentioning Hitchcock. He never made any secret of Hitchcock’s influence. In this film he’s pretty obviously exploring both Rear Window and Vertigo territory. Being de Palma he makes no attempt to disguise the fact that he’s referencing these films. While de Palma clearly has a jaundiced view of modern Hollywood his affection for the old Hollywood of the 40s and 50s is very apparent. 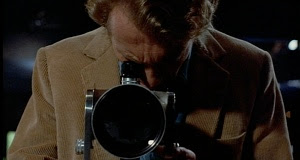 The question mark hanging over this film is, does it go too far over the top? By mainstream 1984 standards it was considered at the time to be a pretty violent sleazy film but the outlandishness goes way beyond that. The plot in its essentials is straightforward once the solution is revealed but the details are pretty outrageous. It’s an excessive film but on the whole the excessiveness works.

It’s also quite funny, and at times very funny. Hitchcock was a master of black comedy and de Palma tries his hand at some Hitchcockian black comedy, fairly successfully.

Craig Wasson is amiable and inept as Jake which is how the character is supposed to be. Jake isn’t a really smart guy but he’s just smart enough to figure out what’s going on. 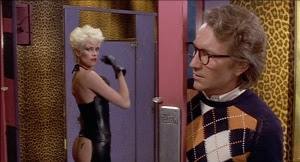 The UK Indicator Power House Blu-Ray release offers a fine transfer and a whole raft of extras in which de Palma and various members of the cast and crew discuss the making of the film and the vicious critical reaction to it at the time.

Body Double is a very Brian de Palma film and that’s a very good thing. It’s also a film about films and about the world of illusion and voyeurism that that entails. This is de Palma doing the things he did best. Very highly recommended.
Posted by dfordoom at 22:16