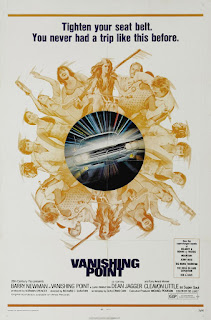 Vanishing Point is a 1971 road movie, a genre for which I have some fondness. It’s a few other things as well, some good and some bad, as we shall see.

It was a fairly low-budget movie, directed by Richard C. Sarafian, and it gained quite a cult following which to some extent it still retains.

There’s virtually no plot. Kowalski (Barry Newman) is a former cop and former racing driver who now makes his living delivering cars cross-country. Having just finished one gruelling delivery he immediately embarks on another, delivering a souped-up Dodge Challenger from Colorado to San Francisco. He makes a bet with his drug dealer that he can deliver the car in fifteen hours, which is apparently impossible but Kowalski is so full of speed he figures he can do it anyway.

Not surprisingly he infringes a few traffic laws along the way but he’s in a hurry so he outruns the Highway Patrol. Eventually there’s a massive manhunt across four states to catch him, even though he’s been guilty of nothing other than a few traffic violations. You see the Establishment is out to get him because he’s a Rebel. He just wants to be free, man, and the Establishment won’t let him.
He forms some kind of crazy telepathic bond with a hyped-up blind black DJ (played by Cleavon Little) known as Super Soul. Super Soul offers him advice over the airwaves but Kowalski seems to hear the messages whether his radio is turned on or not. Super Soul is not just giving him advice on evading the cops but also acts as a kind of spiritual guru. 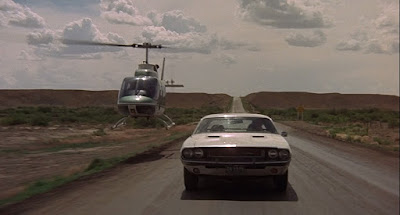 Kowalski has a few adventures along the way - a race with an E-Type Jaguar, an encounter with two very fey carjackers, a meeting with a crazy old man in the desert who collects rattlesnakes for a living, a meeting with some Jesus Freaks and a friendly biker who offers advice and drugs. And there’s also a nude girl on a motorcycle.

Kowalski also has flashbacks to pivotal events in his life, such as his girlfriend’s death and the events which got him kicked out of the police force.

Vanishing Point starts off pretty well. The first half of the movie is mostly high-speed car chase stuff and the stunt driving was quite superb by the standards of the day and still holds up pretty well (and has the advantage of being much more realistic and plausible than later car chase movies).

Then we get to the halfway point and it all falls apart. It starts to get into hippie-dippie counter-culture stuff and becomes unbearably pretentious and dull. All the excitement disappears and the pace slows to a crawl. And we get some quasi-mystical nonsense as well as some incredibly heavy-handed political stuff that serves no purpose other than reinforcing the whole “the evil Establishment wants to stifle our free expression” vibe. 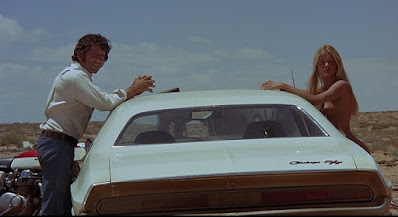 Even the nude girl on the motorcycle is unlikely to keep you awake during the movie’s second half.

Barry Newman’s performance is odd but effective. Much of the time Kowalski is just staring into space and we wonder if he can even see the road. Maybe he’s not seeing it with his eyes but with his soul, man. It’s a performance that works within the context of the film. The rest of the acting is ham-fisted and generally embarrassingly obvious.

Guillermo Cabrera Infante’s screenplay is mostly just incoherent and self-indulgent. I think the movie is trying to say something about different planes of existence and how the material world is just one of those planes.

John Alonzo’s cinematography is at times quite stunning. 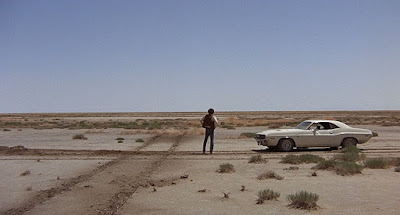 Director Richard C. Sarafian handles the action sequences extremely well and that’s the most positive thing I can say about his directing.

This move has been given a luxury two-disc Blu-Ray release which includes both the US theatrical version and the British theatrical release (which is apparently even longer which is a truly horrifying thought since the US version is already way too long). There’s an audio commentary by the director.

If you’re looking for a 1970s road movie that is actually worth seeing, watch Two-Lane Blacktop instead.

Another movie similar in style to Vanishing Point but which does the arty road trip thing much more successfully and is much more worth seeing is Jack Cardiff’s Girl on a Motorcycle (with Marianne Faithfull).

If you liked Easy Rider you’ll probably like this film. For me it was just too pretentious and too pseudo-mystical and too long and too boring and I can’t recommend it.
Posted by dfordoom at 00:27