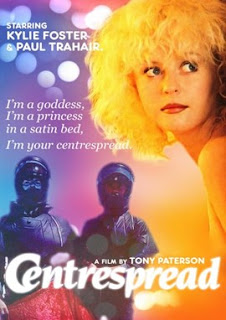 Centrespread is a very odd 1981 ozploitation movie. It’s a movie that consistently fails to go in the direction you’re expecting.

It starts off with a bit of a Mad Max vibe. This is a futuristic society and you’ve got the desert to increase the Mad Max feel. Gerard (Paul Trahair) is a photographer for a girlie magazine. The photos he takes are weird and violent and brutal, but as the movie progresses we find out why. This is a kind of totalitarian society but it’s a society that has taken drastic measures to stamp out violence. Violence is only permitted in the magazines, the reasoning being that violence has to have some outlet and that if violence is allowed in the magazines there won’t be any violence in real life. And that’s how things have worked out. This is a dystopian society in which most people enjoy a very low material standard of living but at least violence has been kept totally under control.

Of course there are elites who live lives of luxury and Gerard is one of those elites. He even owns a car (a cool Ford T-Bird convertible), 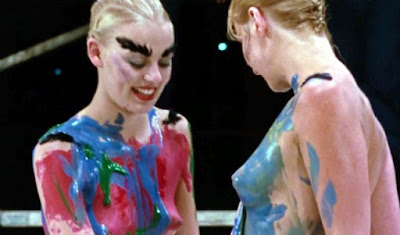 The problem is that Gerard is changing. He doesn’t want to take the same kinds of photos any more. He doesn’t mind taking nude photos but he wants them to be natural. Even worse, he increasingly has the idea that he’d like them to be romantic. Central is not going to like that idea. 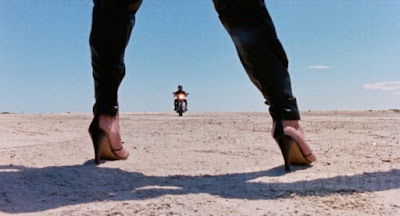 Given that Mad Max vibe that the film gives off early on you keep waiting for some sudden outburst of violence. But it doesn’t happen. Just as in this future society violence is confined to the magazines so the violence in the movie is entirely confined to the photoshoots (which are interestingly shown as successions of still images). Outside of the photoshoots there’s not a single violent act in the movie.

This is a science fiction film but don’t expect any special effects or explosions, or any high technology. This is a future society that uses 1980s computer technology and the magazines are old-fashioned print magazines. Printed on actual paper, with still photographs. Even in 1981 you’d expect some more imaginative ideas on future technology but perhaps that’s the point - perhaps this is a future society that has survived some sort of cataclysm and now has only the remnants of a technological society. It’s significant that Gerard’s car is not some futuristic air car - it’s a 1960s Ford Thunderbird which is apparently as high-tech as it gets in this future world. 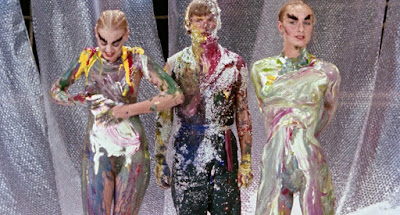 The details of the future society are only filled in gradually and we are only told as much as we need to know. This is a science fiction film that has no interest at all in technology. The focus is on the stifling effect of the tightly controlled future society. It’s a society that offers security, as long as you don’t question anything.

Gerard wants to be able to take the photos that he wants to take, but Central decides what kinds of photos are acceptable. Arty romantic photos are not acceptable.

This is an unconventional dystopian science fiction film, but it’s also a sex film. There is an enormous amount of very graphic nudity. The sex is, oddly enough, very restrained but the nudity is practically non-stop.

The sets are very effective, especially the photographic studio in the middle of a huge warehouse. Visually this is an impressive film. 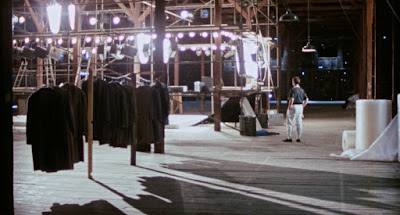 Centrespread has been released by Umbrella Entertainment on a region-free Blu-Ray two-movie disc, paired with Felicity as an Ozploitation Erotica set. Which is both appropriate and inappropriate. Felicity is simply an Emmanuelle clone (although it happens to be a very very good Emmanuelle clone). Centrespread has just as much nudity but it’s an entirely different sort of movie, although the one thing it has in common with Felicity is that like Felicity it’s either a love story masquerading as a sex film or a sex film masquerading as a love story. And like Felicity, insofar as Centrespread is a sex film it belongs very much to that fascinating 1970s sub-genre of sex films aimed at couples.

Centrespread looks and sounds terrific on Blu-Ray and there are some worthwhile extras as well, including an excellent 47-minute contemporary featurette on the making of the film and an interview with the producer.

Centrespread is a very offbeat movie, the kind of offbeat movie that just doesn’t get made any more and that’s a shame because it’s offbeat in a very good way. It’s a total original. It’s also an extremely well-crafted move which was, sadly, Tony Patterson’s only feature film as director. Highly recommended for its oddness.

Given that Felicity is a skinflick, but a very classy upmarket skinflick with some real emotional depth, this two-movie Blu-Ray set is also highly recommended.
Posted by dfordoom at 21:32