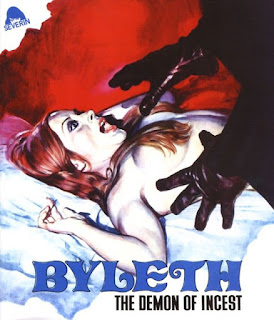 Byleth: The Demon of Incest is a very obscure Italian gothic horror movie (with a dash of giallo) from 1972.

It opens with a prologue in which a prostitute is brutally slain with an unusual three-pronged murder weapon (which we will later learn is a significant detail).

Then we switch to the palatial country home of the Shandwells in Italy, sometime in the late 19th century. Young Duke Lionello Shandwell (Mark Damon) is overjoyed that his sister Barbara (Claudia Gravy and no I don’t know why she chose that as a stage name either) has returned after a lengthy absence. He is delighted until she tells him she has married. This is quite a blow to him. As a child she had promised that she and Lionello would never be parted). This is our first hint that there is an incestuous attraction between Lionello and Barbara although we’re not quite sure whether Barbara is as sexually attracted to him as he is to her. That’s one of the many things that the movie is ambiguous about and it’s the ambiguity that makes this film interesting.

We soon discover that Lionello has quite a few issues with sex. He likes to watch couples making love. It’s implied that he has some sexual performance problems which could of course mean that the only woman who is capable of arousing him is his sister.

Spying on Barbara having sex with her husband Giordano (Aldo Bufi Lando) threatens to tip Lionello right over the edge. 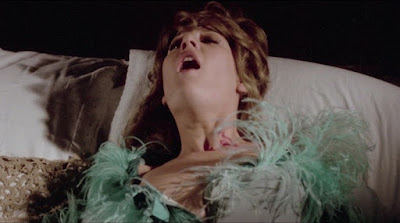 Giordano, who is a pretty decent guy, tries to fix Lionello up with his beautiful cousin Floriana (Silvana Panfili). For a while that looks like it’s going to work. They hit it off well. But, alas, it ends badly. Floriana is a very pleasant and very attractive young lady but she is not Barbara.

There have been some other murders as well. The local priest suspects that a demon named Byleth is involved. That three-pronged murder weapon is apparently one of Byleth’s trademarks. Byleth is a demon who specialises in arousing incestuous desires. Barbara has a childhood memory of Lionello muttering the word Byleth to himself repeatedly.

It sounds like Lionello may be possessed by Byleth, and may in fact have summoned the demon. Years earlier his father had to leave England to avoid a scandal in which witchcraft was involved. 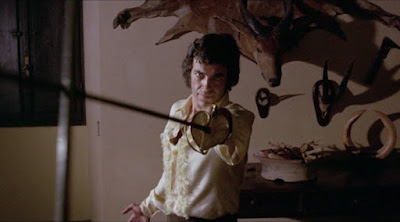 This is where the film’s ambiguity kicks in again. Lionello is a very disturbed young man with some major sexual hangups and some major sexual guilt. He is sufficiently unstable and disturbed for it to be plausible that he is simply a murderer. But he’s also quite crazy enough to try stuff like summoning demons. There’s also the possibility that the demon was originally summoned by Lionello’s father. Whether the murders have simply been committed by a very disturbed young man or whether there are supernatural forces involved is the big question and the movie leaves this this an open question.

There’s also the fact that we’re mostly seeing things from Lionello’s point of view, so we can’t be sure whether there’s a real demon, or whether Lionello thinks there’s a real demon, or whether we’re just seeing the delusions of a very disturbed young man. It can also be asked whether Lionello has been made crazy by his incestuous longings for Barbara or whether he’s been made crazy by demonic possession, possession by a demon who is notorious for inducing incestuous lust. 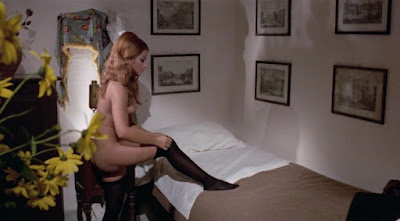 Yet another layer of ambiguity is added by Barbara. Is she aware of Lionello’s sexual obsession with her? Does she, to some extent, share this obsession?

There are some hints of the giallo genre here although this is essentially gothic horror.

There’s surprisingly little gore. There is however plenty of sex and nudity. On the other hand, despite the subject matter, this is no crude sleazefest. It’s a movie that makes an attempt to explore the links between madness and the occult and to ask whether madness leads to an obsession with the occult or whether occult forces ca drive people to madness. 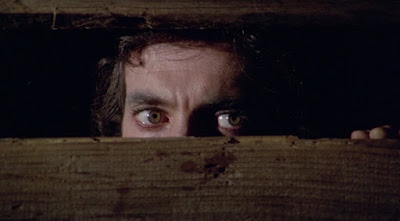 Mark Damon is pretty good as Lionello. Lionello is a tortured soul but he’s not entirely unsympathetic. He may be a monster or a victim. Damon does a decent job of teasing out the complexities of the character. Claudia Gravy is also very good as Barbara, a woman who means well but may be unwittingly driving her brother further into madness.

Director Leopoldo Savona paces the film in a somewhat leisurely manner but he keeps us interested by keeping us uncertain. The fairly high production values help. It’s a handsome film but unusually for Italian genre cinema of that era it appears to be trying to avoid being a mere exercise in style.

Byleth: The Demon of Incest isn’t one of the great Italian gothic horror flicks but it’s worth a look if you don’t mind the fact that the violence is very restrained. Recommended.

Severin have released this movie on both DVD and Blu-Ray. They’ve given us the German cut which is the only surviving uncut version and while the transfer isn’t stunning due to problems with the source material it still looks pretty good.
Posted by dfordoom at 23:11