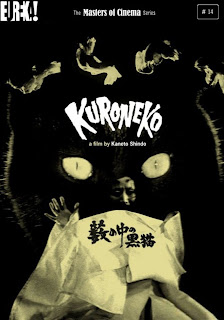 Kuroneko (or Black Cat) is a 1968 Japanese ghost movie written and directed by Kaneto Shindô and made by the Toho studio.

Japan is being torn apart by war. Yone (whose son was taken away by the army to fight in the endless wars) and her daughter-in-law Oshige live alone in their humble house near a bamboo grove. One day a group of samurai arrive. They loot the house and rape and murder the two women. Nothing is left alive, except for two black cats.

Three years later a samurai encounters a young woman on a lonely road at night. She tells him she is afraid to walk though the bamboo grove alone. If only the brave and noble samurai would escort her home? When they arrive at her home she invites him in. She and her mother live alone in the house. The two women ply the samurai with sake. The samurai thinks he’s going to get a roll in the hay with the daughter. In fact he gets his throat torn out (there’s more than a hint of vampirism here).

The sequence in the bamboo grove is clever. We naturally think it’s the young woman who is likely to be in great danger. But in fact she is the hunter, not the hunted.

This samurai will not be the last to meet this grisly fate. The so-called Rajo Gate Ghost will claim many victims. The mother and daughter who were murdered are of course now ghosts, or more specifically they’re cat-spirits. Any samurai passing near the Rojo Gate will get seduced and slain by them.

So this is very much a revenge movie, among many other things.

The local warlord, Raiko, is at his wits’ end. It’s bad enough to lose so many samurai but he is also under pressure from imperial officials to put an end to the Rajo Gate Ghost. Perhaps his bravest samurai, Yabu-no-Gintoki, will be the man to do this.

The twist is that Gintoki is Yone’s son, now returned from the wars and now a samurai.

Gintoki does not know if his mother and wife were killed or simply fled into the mountains. All he knows is that his home is now a charred ruin.

Gintoki encounters Oshige on the road and escorts her home. He doesn’t get his throat ripped out. He is recognised by the women. He notices immediately that they look just like his mother and wife but he does not know whether they are alive, or spirits who have taken the form of Yone and Oshige, or ghosts.

It’s important to remember that the Japanese (and the Chinese) have a very different concept of ghosts compared to western folklore. These are very corporeal ghosts. And they can (and do) have sex.

There’s emotional drama but, as in so many Japanese films of this era there’s also a strong political subtext involving the contempt of the samurai for the common people and the cruelty and violence of the samurai. There’s also a pretty obvious message about the miseries and brutality of war. Unlike a lot of other Japanese movies this one doesn’t get too heavy-handed with the politics.

This is a very stately film, clearly drawing heavily on the traditions of the Noh and Kabuki theatre. In fact it has a very stagey feel. There’s an air of theatrical unreality to everything, with the opening sequence being the only minor concession to any kind of realist aesthetic. The theatricality emphasises the supernatural aspects.

The action scenes all involve the women flying through the air (obviously suspended by wires). Even the scenes of action and violence are therefore determinedly artificial.

This is not a movie that you want to try to over-analyse. What you see is what you get. The political subtext is trite. The symbolism is obvious. There’s some obvious half-baked Freudianism. There is some emotional resonance to the relationship between Gintoki and his now ghostly wife. It’s the theatricality that is by far the most interesting and successful thing about Kuroneko. That’s the main reason to see the film. Apart from that it’s a reasonably decent ghost movie and it’s recommended for its visual interest.

The Eureka UK release includes the movie on both Blu-Ray and DVD. The only extra is a 32-page booklet which includes an extraordinarily uninteresting interview with the director.
Posted by dfordoom at 17:50