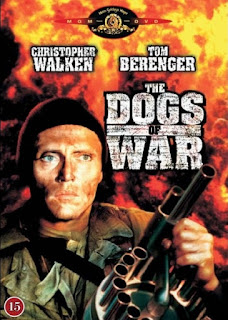 The Dogs of War, released in 1980, is based on Frederick Forsyth’s 1974 novel of the same name. It’s one of the classic mercenary movies.

James Shannon (Christopher Walken) is a mercenary leader who has just managed to extricate himself and his men from a rather nasty situation. Now he’s been offered another job. A mining consortium wants to invest a very large amount of money in a (fictional) West African country called Zangaro. They’re worried that the regime of President Kimba might not be too stable. Shannon’s job is to conduct a reconnaissance to find out exactly what the situation on the ground is in Zangaro. They’re worried about the possibility of making a deal with Kimba only to see him overthrown.

He doesn’t take long to realise that the situation on the ground is very very bad. Kimba’s regime is corrupt and brutal. Kimba is both vicious and crazy.

Shannon’s cover story is that he’s a naturalist photographing birds for a nature magazine. It doesn’t fool anyone. He finds himself in a very unpleasant spot. Very unpleasant indeed. He is deported from Zangaro, still alive but only just. 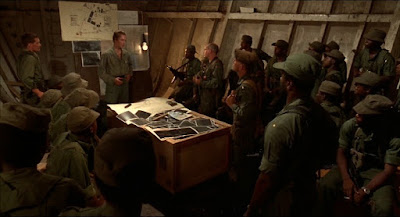 Shanon reports back to his employers that Kimba’s regime is appalling and that Kimba is mad but very firmly in charge. There is no likelihood whatsoever of any kind of internal coup. Shannon’s employers are not happy. They don’t want to deal with a madman. They ask Shannon if it would be possible for a small mercenary force to overthrow Kimba. Shannon replies, “Sure, why not?”

Shannon doesn’t want the job at first but when his personal life doesn’t pan out as he’d hoped he changes his mind. He agrees to overthrow Kimba.

He has 41 days to organise an assault on the military garrison in the capital of Zangaro. 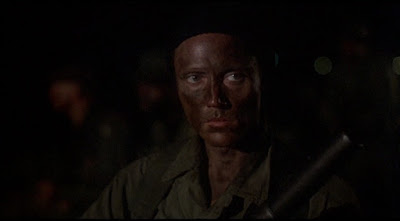 Much of the film’s running time is occupied by a slow buildup to the main action, as Shannon assembles his force, makes his plans and obtains the weapons he’ll need. This slow buildup might not please all viewers but it’s faithful to the source material. The approach that Forsyth invariably took was to do meticulous research and then to describe in intricate detail the planning and preparation for the protagonists’ operation. The film version of Forsyth' first bestseller  The Day of the Jackal took that approach as well, very successfully. This film adaptation of The Dogs of War uses the same technique and it works just as well.

Of course everything hinges on whether the action scenes are worth the wait. And they are. They’re excellent. 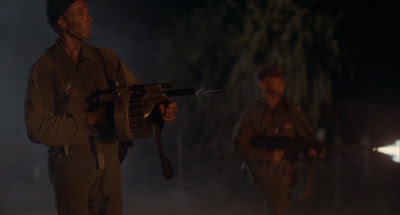 If you’re making a movie about mercenaries and you want it to be a bit more than just a celebration of violent action you can either provide some focus on the motivations of the charters or you can focus on the cynical double-crosses and sleazy political machinations of the people financing the operation. This movie does a bit of both. We get the message that nothing ever really goes right for James Shannon except when he’s in the jungle with a machine-gun in his hands. He’s a decent enough guy but he doesn’t really have a handle on life. So he keeps taking jobs as a mercenary because that’s something he does understand. And we do get some neat double-crosses and counter double-crosses.

Having Jack Cardiff as the cinematographer helps a lot. This movie looks great. It’s not just the action scenes in Africa that look good - the New York street scenes and the scenes in London look just as good. Director John Irvin keeps everything under control. 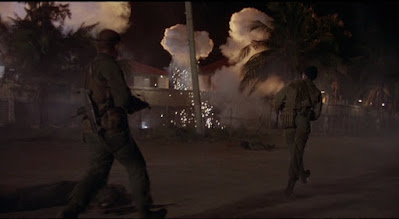 The actors are all solid but it’s Christopher Walken’s typically eccentric performance that stands out.

This is a slightly up-market mercenary movie that offers a bit more than just mayhem. It’s not quite as good as Dark of the Sun (the best mercenary movie ever made) and maybe it doesn’t offer as much non-stop action as The Wild Geese but it still ranks in the top five among movies in this genre.

The version I saw was the original theatrical version shown in the US. Some DVD and Blu-Ray releases also include the longer international version.

The Dogs of War is highly recommended.
Posted by dfordoom at 23:12