The Forbidden Photos of a Lady Above Suspicion (1970) 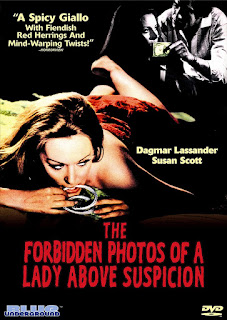 Luciano Ercoli’s The Forbidden Photos of a Lady Above Suspicion, released in 1970, is a kind of giallo although it might be more accurate to describe it as a giallo-esque suspense crime thriller. It was released on DVD by Blue Underground a few years back (and happily the DVD seems to be still in print).

Minou (Dagmar Lassander) is married to an industrialist named Peter. Peter seems to be the sort of businessman who sails close to the wind financially and enjoys the risk-taking side of business. As the film opens Minou tells us in a voiceover that she intends to give up smoking, drinking and taking pills. She’s going to give them up any day now.

She is almost raped at the beginning of the movie. At least she thought she was going to be raped but her assailant (played by Simón Andreu) seemed to have something else in mind, something much more twisted. He wants to play a game with her mind. He tells her that her husband Peter is a murderer and that he has proof of this. If she fails to show up to an appointment at his apartment he will go to the police with the evidence against Peter.

Minou loves her husband and will do anything to save him. She’s also perhaps a little naïve and with all the booze and the pills she is also perhaps not always thinking too clearly.

The blackmailer intends to force her into a sexual relationship a relationship with some definite sado-masochistic overtones.

And as to the forbidden photos - they do make their appearance later on after a major plot twist.

Minou is increasingly confused and desperate. Her friend Dominique (played by Nieves Navarro although she’s billed here as Susan Scott) has a plan to get Minou out of her predicament.

It’s not too difficult to figure out where the plot is heading although there was one important point which did surprise me.

There is, surprisingly, very little graphic violence and no nudity. Of course European genre movies of this era often existed in multiple cuts. The running time on Blue Underground’s DVD release suggests that it’s uncut but with these types of films you can never be sure.

The acting seems very flat but that may be partly the very poor very lifeless English dubbing (sadly the DVD includes only the English dubbed version).

Luciano Ercoli had a brief career as a director in the early to mid 70s (and a longer career as a producer beginning in the early 60s). His output included a couple of genuine giallos. Ernesto Gastaldi, who co-wrote the script, had an extremely prolific career (spanning 40 years) as a screenwriter.

Dagmar Lassander had a busy movie career from the mid-60s to the mid-80s after which she worked mostly in television. She’s best known to cult movie fans for her rôle in Mario Bava’s Hatchet for the Honeymoon. Her performance in The Forbidden Photos of a Lady Above Suspicion is adequate. Spanish-born Nieves Navarro (who was married to Luciano Ercoli) gives a nicely decadent performance as Dominique. Not surprisingly she made several movies for Ercoli.

I don’t think this movie can really be described as a giallo. It lacks too many of the crucial ingredients. It has some of the visual touches that we associate with giallos but it’s rather restrained stylistically and it’s not violent enough or sexy enough to be a true giallo. It’s just a suspense movie.

Blue Underground’s DVD release offers a very nice anamorphic transfer. The only extra of note is a brief interview with co-writer Ernesto Gastaldi. Gastaldi has one very amusing anecdote about Riccardo Freda with whom he worked on The Horrible Dr Hichcock. Freda asked Gastaldi if it was OK to tear up the last ten pages of the script. Gastaldi objected that if he did this the story would make no sense. Freda replied that that was the whole point - he didn’t want the film to make any sense. I think that sums up the brilliance of Italian film-making in this era rather well.

The Forbidden Photos of a Lady Above Suspicion is well-crafted and looks good and unlike some giallos the plot makes perfect sense and the solution is clearly explained. It’s worth a look although this one might be one to rent rather than buy.
Posted by dfordoom at 04:31