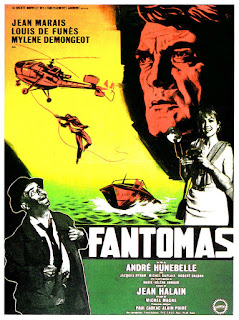 Fantomas, released in 1964, was the first of the three very popular French adventure/crime films about master-criminal Fantomas which were directed by André Hunebelle. Superficially they have a lot in common with the eurospy movies of the 60s and they were certainly influenced by the success of the Bond movies.

The movie begins with a daring jewel robbery in Paris, in broad daylight. The arch-fiend Fantomas has struck again. There is public outrage. What are the police doing to protect decent citizens from this brilliant but ruthless master-criminal? What is Commissioner Juve (Louis de Funès) doing to bring Fantomas to justice? The press is having a field day, particularly popular muck-raking journalist Fandor (Jean Marais). Fantomas may be a menace to law and order but he certainly helps to sell newspapers.

Fandor has come up with an ingenious theory. Fantomas does not exist. He was invented by Commissioner Juve as a means of diverting public attention away from the incompetence of the police. But Fandor will soon discover that Fantomas is very real indeed.

For Fantomas it is not enough just to commit very profitable crimes. He derives even more enjoyment from humiliating the forces of law and order and toying with his enemies. Making a fool of Commissioner Juve is almost too easy but Fandor at least presents him with a bit of a challenge.

Fantomas intends to set up both Juve and Fandor, using his abilities as a master of disguise (an aspect of his genius that is lifted directly from the original novels). There’s no great advantage to Fantomas in this - it’s motivated by pure malevolence. Fantomas also has plans for Fandor’s girlfriend Hélène (Mylène Demongeot). And again his motive is pure spitefulness.

Meanwhile Juve has come up with that he thinks is a brilliant idea. He will lay a trap for Fantomas, with a vast fortune in jewels as the bait. But trapping Fantomas is no easy matter. It would be no easy matters for a great detective, and Juve is most definitely not a great detective. He’s a bumbling ass. Perhaps Fandor will have a better chance of foiling Fantomas’s schemes.

Fantomas is the villain, and he’s a villain with no redeeming features whatsoever, but he is very much the focus of the movie. No matter how diabolical he might be we can’t help feeling that he deserves to get away with his crimes because he is clearly so much cleverer than either Fandor or Juve. Fantomas is the character we’re really interested in.

The tone of this movie is always tongue-in-cheek and often straight-out comic. Juve is a character played entirely for comedy. And it has to be said that he is genuinely very amusing.

There are some very impressive stunts and towards the end we get a terrific extended chase sequence - a chase by car, motor-cycle, train, helicopter, boat and submarine. It’s executed in a witty and very clever manner. While this movie was influenced by the first two Bond movies in some ways it anticipates the style of the 1970s Roger Moore Bond films.

The arch-criminal Fantômas, created by Marcel Allain and Pierre Souvestre, made his first appearance in print in 1911 in the novel Fantômas and featured in another 42 novels (the last of which was published in 1963). Fantômas made the transition to film as early as 1913. Fantômas subsequently featured in several other films such as Juve contre Fantômas (1913) and later in comics right up until the 1990s. There was a 1980 French Fantômas TV series. Fantômas occupied a place in French pop culture somewhat analogous to that of Dr Mabuse in German pop culture.

This 1964 Fantomas movie retains much of the spirit of the original Fantômas but inevitably such a movie made in 1964 was going to be heavily influence by the massive pop culture phenomenon that was the Bond movies. As a result it has a much more tongue-in-cheek flavour and it has a lot of Bond-style visual elements.

This movie also has something in common with the 1960s German Dr Mabuse movies which began with Fritz Lang’s The 1,000 Eyes of Dr Mabuse (1960) and continued with The Return of Dr Mabuse (1961), The Invisible Dr Mabuse (1962), Dr Mabuse vs Scotland Yard (1963) and Death Ray Mirror of Dr Mabuse (1964). There’s also a slight resemblance, especially in tone, between Fantomas and the wonderful Lemmy Caution movies such as Poison Ivy (1953) and Dames Don't Care (1954). And a slight affinity also to movies such as Danger: Diabolik! and Satanik.

André Hunebelle also directed quite a few of the OSS117 eurospy movies including OSS 117 Is Unleashed (1963). He certainly had an affinity for adventure movies. He does an excellent job here, pulling off some remarkably cool action sequences.

Fantomas is a total romp, much more light-hearted and whimsical in tone than the source novels. Those source novels could have been the basis for an interesting much darker film but in 1964 Hunebelle’s approach was probably, in commercial terms, the wisest one to take. And as it stands Fantomas is a movie that is, to an extraordinary degree, in tune with the 60s zeitgeist. It’s a great deal of stylish fun as well. Highly recommended.

Kino Lorber have released all three 1960s Fantomas movies is an excellent boxed set (available on both DVD and Blu-Ray editions). The 1964 Fantomas includes an excellent audio commentary by Tim Lucas. The transfer is excellent.
Posted by dfordoom at 16:47