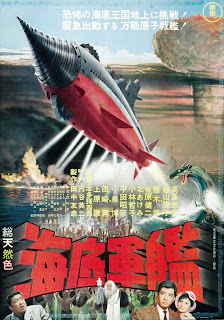 Atragon is a 1963 Japanese science fiction movie directed by Ishirô Honda. Ishirô Honda is of course best known as the man who first brought Godzilla to the screen. He also directed the wonderful 1957 sci-fi epic The Mysterians. Atragon includes just about everything that I personally could hope for in a sci-fi movie.

An engineer is kidnapped and the witnesses, including a glamour photographer, tell the police a strange story of a man emerging from the sea. The police start to get really worried when other engineers start disappearing. The police inspector in charge of the case is even more worried when he encounters a strange guy who claims to be an agent of the Mu Empire. This guy really does disappear into the sea.

As everybody knows (or at least everybody in the movie knows) the Mu Empire vanished beneath the ocean 10,000 years ago.

The agent of the Mu Empire, Agent 23, is interested in a man named Kusumi (Ken Uehara). Kusumi had been a Vice-Admiral in the Imperial Navy. His protégé Captain Jinguji (Jun Tazaki) had been a genius designer who had designed an incredibly advanced submarine, the A400. It came too late to affect the outcome of the war and the last of the A400 boats, the A403, was lost with all hands (including Captain Jinguji) in the final days of the war.

Agent 23 is convinced that Captain Jinguji is still alive, and that he is working on a new submarine, the Atragon, which will be a mortal threat to the Mu Empire. The world’s most advanced submarine, the American Red Satan (!), has just been destroyed by the Mu Empire but the Atragon would be a much more formidable threat. The Empress Mu intends to extend the Mu Empire’s dominion over the whole planet.

The news that Captain Jinguji might be still alive is a shock to his daughter Makoto (Yôko Fujiyama). She was three years old when the war ended and has been raised by ex-Admiral Kusumi.

Captain Jinguji is alive and he has built a new super submarine. The problem is that Captain Jinguji is quite mad. He has not accepted that the war is over. He has established a secret base on an island from which he intends to re-establish the Japanese Empire.

There is of course a very obvious and conscious parallel being drawn between Captain Jinguji’s crazy plans and the equally crazy plans of the Empress Mu. In both cases it’s an attempt to revive the glories of the past. Admiral Kusumi on the other hand represents the new world and the new Japan. He has come to terms with the end of the Japanese Empire. He is a man of peace, although he also accepts that the Mu Empire will have to be destroyed.

So there’s lots of stuff about Japan trying to find its place in a new world, trying to move forward to a peaceful future, but with some elements in society still looking to the past. There’s a conflict between Japan’s official pacifism and the need to counter a real threat.

The political aspects are also intertwined with some emotional conflicts. Admiral Kusumi and Captain Jinguji have tried to deal with the shock of Japan’s defeat in different ways and for Jinguji there’s the difficulty of trying to re-establish a relationship with a daughter who finds his actions and attitudes incomprehensible. There’s some surprising nuance in this movie.

This movie has super-submarines. It has secret agents. It has secret island military bases. It has monsters (yes, it has monsters). It has a threat to Civilisation As We Know It. It has a beautiful but evil queen. Best of all it’s a lost world/lost civilisation story, a genre of which I’m extremely fond. This movie ticks all my boxes. And it has not just a super-villain but an ambiguous villain-hero as well.

Of course you know there’s going to be a climactic battle between the Mu Empire and the forces of Earth, but in the meantime there’s the kidnapping of Makoto by agents of the Mu Empire to provide further suspense and excitement, and to provide the necessary Woman In Peril angle. It always helps if the woman in peril is young and pretty and Makoto qualifies on both counts.

The miniatures work is very impressive. The special effects are excellent. There are some cool sets.

The Cheezy Movies DVD release only offers the English dubbed version but it’s in the correct aspect ratio (the film was shot in Tohoscope) and the anamorphic transfer is very good. There have been other DVD releases but this one seems to be the easiest to get hold of at present.

Atragon offers all the ingredients that made Toho’s science fiction and monster movies so much fun and adds some thematic subtlety. This is just a terrific movie and it’s highly recommended.
This is another great movie I discovered through Michael's Moviepalace.
Posted by dfordoom at 00:48

I saw your post on Michael's Moviepost - I hadn't realised you'd never seen it, or I'd have recommended it myself, as I knew it would be right up your street.

It is absolutely one of my favourite Japanese films (of all films, not just kaiju). The flying submarine is absolutely awesome. Can't comment on the English dub, as my DVD has the Japanese audio with subtitles (I only listen to English dubs if the original doesn't have subtitles, even on the web).

My one quibble would be that the final battle is a bit one-sided - not the only Japanese film I've got that impression from. But the final scene is really effective, and unexpected.

I just ordered this and The Mysterians. Still looking for Latitude Zero. Love this sort of movie, and I'll be delighted to finally see Manda (the sea snake serpent) in action other than in Destroy All Monsters and Final Wars.

Randall Landers said...
I just ordered this and The Mysterians. Still looking for Latitude Zero.

Latitude Zero does seem to be totally unobtainable. I don't think you'll be disappointed by The Mysterians and Atragon. Lots of fun viewing there.