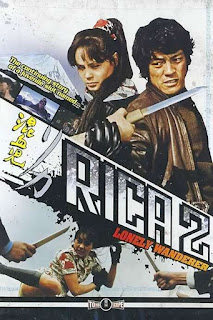 The Rica trilogy, which began with Rica in 1972, was a very successful if rather atypical example of the pinky violence sub-genre, that fascinating genre of 1970s Japanese exploitation movies. Rica 2: Lonely Wanderer followed in 1973.

The pinky violence genre, an off shoot of the pink film genre, was a desperate attempt by a number of Japanese studios to keep themselves afloat in the face of the devastation that television was inflicting on the Japanese film industry. The idea was that if you wanted to tempt audiences back to movie theatres sex and violence was the way to do it.

As Rica 2: Lonely Wanderer opens Rica (Rika Aoki) is in reform school but she naturally has no trouble at all breaking out. She wants to find her friend Hanako who is in trouble. Hanako, like Rica, is only half-Japanese and therefore occupies a slightly uncomfortable position in Japanese society. Rica’s father was an American serviceman who raped her mother during the Korean War. Rica was later raped as well.

Hanako’s problems began when she was one of a number of girls who were “entertaining” American soldiers on board a ship, the Tohuko. The ship mysteriously blew up. The Tohuko was at the centre of complicated illegal yakuza activities which we will discover have something to do with a yakuza kingpin, Boss Shimamura.

Boss Shimamura is old school yakuza and feels very strongly that yakuza should settle their differences without harming innocent bystanders. But he is an old man and he is dying. The new boss of the Shimamura Gang is going to be his beautiful young daughter. And she’s a lot more ruthless. Yes, this time Rica will be going up against a glamorous lady gangster.

Rica’s interest in the Tohuko case is very inconvenient for a lot of people. Four professional assassins are sent to kill her. Four men against one girl is just not a fair fight. Those guys don’t stand a chance. Rica is not just a girl, she is a one-woman army. Eight guys might have had a chance. She has no difficulty killing three of the assassins and terrifying the survivor.

Finding Hanako will be more difficult. Rica tracks her down to a mental hospital, but getting her out of the hospital will be a challenge.

She can’t expect any help from the cops. They’re in the pockets of the yakuza.

Then some mysterious guy named Hachiro shows up. Is he on Rica’s side or not? Is he a yakuza, or a cop, or something else? More importantly, could he be the man Rica needs? Rica is an awesome killing machine but she’s still a woman. What she needs is love. If she can find love she might be able to give up killing people. And she obviously thinks Hachiro is kinda hunky.

The plot is a bit creaky but it’s mostly an excuse for an endless series of fight scenes so it doesn’t matter too much. The thinking behind this movie seems to have been that if the action slowed down for thirty seconds, just have half a dozen guys leap out of the bushes and attack Rica for no obvious reason. I have to say that it’s a technique that works fairly well.

This movie has an odd tone. There are countless fight scenes, most of them pretty impressive but at times rather stylised. The violence is, on the whole, rather restrained compared to the more famous pinky violence films. There’s also not all that much of the sex and nudity which were such distinctive features of this genre. At times the tone becomes whimsical and at other times slightly surreal. There’s a definite cartoonish feel.

This movie could be described as Pinky Violence Lite. There’s a huge body count but no fountains of blood. The delirious sleazy excesses and the sadomasochism of bona fide pinky violence classics like Terrifying Girls' High School: Lynch Law Classroom (1973) are not to be found here. Rica 2: Lonely Wanderer is not exactly wholesome family entertainment but it’s wholesome by pinky violence standards.

There’s a great scene in which Rica and Hachiro are tied up and are about to be fed to the sharks. Then Rica remembers that she has a knife in her panties (a sensible girl never leaves home without a knife concealed in her panties). If only Hachiro could reach that knife. But they’re both tied up. There’s only one thing for it. Hachiro will have to use his mouth. He’s a brave lad and he’s willing to give it a try even if it does mean having to bury his face in her panties.

The Rica movies made beautiful half-Japanese actress Rika Aoki a major star but her film career was extremely brief. She made just four movies in total. The truth is that compared to the queens of pinky violence (Meiko Kaji, Miki Sugimoto and Reiko Ike) she just wasn’t quite as good an actress and she didn’t have their star quality or their charisma. She does get to sing several times.

She also gets to wear a rather cool cape which is the sort of thing you wear if you’re a kickass action heroine.

Rica 2: Lonely Wanderer compares reasonably well with the first Rica movie. It’s fast-moving and entertaining. It’s recommended but if you’re new to pinky violence then I’d suggest movies such as Girl Boss Revenge (1973), Sex and Fury (1974), Terrifying Girls' High School: Lynch Law Classroom (1973) or Female Prisoner #701: Scorpion (1972) as being more representative of the sleazy delights the genre has to offer.