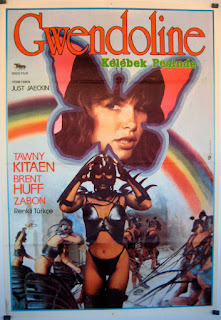 Just Jaeckin’s Gwendoline is a kinky sexy adventure romp, inspired by the fetish comic strips of John Willie. The movie has a comic book feel. It was destined to be a cult movie from the start. Only a cult audience could appreciate such quirkiness.

Gwendoline (Tawny Kitaen) arrives in a seaport somewhere in Asia, packed inside a wooden crate. Neither she nor her faithful maid Beth have passports. They also don’t have any money. She is immediately kidnapped by gangsters. They want something from her but they don’t speak English so she has no idea what it is they want. Then Willard (Brent Huff) smashes through the window and takes care of the gangsters. He could rescue Gwendoline but rescuing females in not in his line. It doesn’t pay.

Willard is your typical American square-jawed hero that you’d find in comic books, pup magazines and movie serials. Except that he isn’t. He’s completely mercenary and completely selfish. The typical hero of that type should be not just ruggedly handsome and capable of out-fighting anyone he encounters, he should be pure of heart. There’s nothing pure about Willard. He’s a ruthless adventurer who loves as casually as he kills, with no thought for anyone but himself.


Gwendoline needs Willard’s help to complete her quest. Willard has no intention of doing so. But he’s never met two young ladies quite as determined as Gwendoline and Beth. They manage to con him into helping them. Willard is even more appalled when he discovers what Gwendoline’s quest is. Her father ventured into the land of the Yik-Yaks to find a rare butterfly. He collects butterflies. Very few people have entered the land of the Yik-Yaks. None have come out alive. The quest for that butterfly cost Gwendoline’s father his life. Now Gwendoline wants to find the butterfly. It’s the least she can do for poor old Dad’s memory. It’s an insane idea which seems certain to get them all killed but there’s no reasoning with Gwendoline and there’s no resisting her. And Beth is totally devoted to her mistress, and she can be just as scheming and persuasive.

After encountering countless perils our three adventurers reach the land of the Yik-Yak. It’s an amazon society ruled over by an evil insane queen. The only man there is an ageing scientist, hopelessly in thrall to the queen. He has discovered the secret of the mountain in which the Yik-Yak live. It involves a volcano and a lot of diamonds.

While John Willie’s Sweet Gwendoline comic strips were bondage/fetish oriented Jaeckin wanted to do a comedy adventure romance, but with enough kinkiness to keep things interesting.

The highlights of the movie are the sets and the costumes, and the wonderfully bizarre visual set-pieces. The chariots pulled by girls are a lovely touch.

The casting works perfectly. Jaeckin needed a heroine who was beautiful and striking and sexy but Gwendoline also has to be sweet and innocent and amusing and a bit crazy (but in a nice way). Tawny Kitaen manages to do all that. Brent Huff does the cynical hardbitten adventurer thing to perfection. Zabou Breitman makes Beth more than just a side-kick, and she’s delightful. The three leads combine perfectly.

There’s plenty of kinkiness here but it’s all done in a fun way and in a fantastic way. This is not reality. There’s not a single mention of a real country or a real city and no indication of the time period in which the story is set. It takes place in a totally imaginary world, a kind of dream world, and everything about that world is pure fantasy, so scenes which might have been a little disturbing become witty and amusingly outré rather than disturbing. And it’s basically a good-natured movie.

Jaeckin is a director that critics at the time liked to sneer at. He was dismissed as little more than a pornographer. To a large extent this critical disdain resulted from the fact that Emmanuelle was the most commercially successful French movie of all time. A movie that aims for popular success and achieves it always enrages a certain kind of film critic. Gwendoline was a major hit as well, which made those critics dislike Jaeckin even more. In fact Jaeckin’s movies were successful because Jaeckin knew how to make visually lush movies that look incredibly expensive and work perfectly within the confines of what he was trying to achieve. And he could make ambitious movies and bring them in on time and on budget. His filmography is small but includes three movies (Emmanuelle, The Story of O, Gwendoline) that are the best movies of their type ever made.