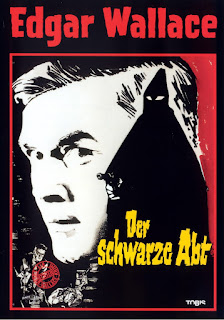 The Black Abbot (Der schwarze Abt) is a 1963 entry in the West German Edgar Wallace krimi series. I’ve seen this one before, but in an English dubbed version years ago.

Edgar Wallace's original novel The Black Abbot, published in 1926, is one of his best. It has all the classic Edgar Wallace ingredients, mixed to perfection.

The movie takes place at Fossaway, the Chelford family seat in England, where a dead body has just turned up.

Scotland Yard are called in but as yet Inspector Puddler (Charles Regnier) and his assistant Horatio W. Smith (Eddi Arendt) can make no sense of the murder.

There’s plenty of scheming going on. Mary Wenner (Eva Ingeborg Scholz) is angling for marriage to Lord Chelford. Crooked lawyer Arthur Gine has an angle. So does his even more crooked head clerk. His angle involves marriage to Gine’s sister Leslie (Grit Boettcher). The butler, Thomas Fortuna (Klaus Kinski) is definitely hatching some plot. The administrator of the Chelford Estate, Dick Alford (Joachim Fushsberger), is up to something. He has some marriage plans as well.

At the bottom of all the scheming is the Chelford Treasure. Nobody has any idea where the treasure is or of its value (it’s rumoured to be a cache of gold but there’s also a rumour that it includes a secret wonder drug) and it may be just a legend. But it may be real. There are people who think it’s worth taking the chance that the treasure really exists.

And there’s quite a high body count.

We’re kept in the dark rather effectively as to whether some of the characters are good guys or bad guys.

Franz Josef Gottlieb directed several of the Wallace krimis. He does an effective job here.

As usual with a krimi it’s set in England but shot in Germany and it doesn’t look anything like England but that adds to the fun.

Something that struck me forcibly when I started watching these movies subtitled rather than dubbed is how much it changes the performances. I’d always thought of Eddi Arendt as a particularly annoying comic relief actor but it turns out that much of that was due to bad dubbing. He’s actually not that bad, in fact he can be quite amusing.

I now have this movie in an excellent Blu-Ray release from Tobis. Seeing these krimis in the original German with English subtitles makes a huge difference. Tobis also presents the movie in a 16:9 enhanced transfer in the correct aspect ratio (the film was shot in Ultrascope, a German version of Cinemascope).

Tobis have released all of the krimis in their Blu-Ray sets (and on DVD). The majority either include the English dubbed versions or include English subtitles but not all do. These are German releases but they’re very easy to obtain. You don’t need to order them from Germany. The Edgar Wallace krimis have been available for years in dodgy grey-market versions. Seeing them presented in truly excellent transfers makes a huge difference. The visual style in a large part of the appeal of these movies.

The Black Abbot incorporates all the features that you could wish for in a krimi. Deliriously entertaining. Plus of course you get Klaus Kinski. Highly recommended.
Posted by dfordoom at 22:19

I got the DVD box set about three years ago, so have only ever seen them in widescreen, in German with subtitles; these can be found online for the films that don't have them - just play the disc on a pc or laptop and import the subtitle file. I can guess how awful Eddi Arendt would have been dubbed, but he really grew on me.

Funnily enough, I watched this one again only a couple of weeks ago. It's beautifully made, and very well cast. It's entertaining, and a perfect example of what I call Ludicrousology - you'll go madder than a Klaus Kinski character if you try to make sense of the plot of some of these krimis; there's one killing in this film that I've seen twice and still can't work out what happened. Just go with the flow! I'd recommend these as well (their depictions of the UK are utterly hilarious sometimes).