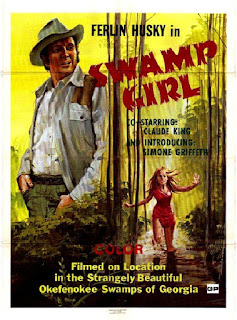 Swamp Girl is a very low-budget hicksploitation movie released as part of a Something Weird swamp double-header (paired with Swamp Country). It’s definitely hicksploitation but despite being made in 1971 it’s not, as you might expect, a sex and sleaze fest. There’s no nudity at all and the violence is very low-key.

It was shot (in colour) on location in the Okefenokee Swamp in Georgia.

The swamp girl is Janeen (Simone Griffeth) and she lives in the Okefenokee Swamp with her pa. Janeen’s pa is a black man. Janeen is very pretty, very blonde and very white. It’s apparently never occurred to her to wonder if maybe he’s not her real pa.

The swamp girl is a kind of local legend. Nobody is sure if she really exists. Lots of people claim to have seen her but maybe they’d just had too much moonshine whiskey.

Now she’s been spotted again, near a spot where where a dying man was found. The man died of snakebite but the locals are inclined to think that the mysterious swamp girl had something to do with it.

Swamp Ranger Jimmy Walker (he’s a kind of singing swamp ranger) sets off to find out what’s going on in the swamp. 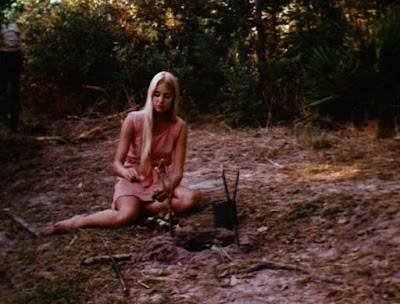 He finds the swamp girl. In fact she saves his life. He tells her that there could be trouble coming for her and her pa. They might not be left alone any longer. Janeen reports all this back to her pa. Her pa then breaks the news to her that he’s not her pa and that she should call him Nat instead and now she learns the truth about her origins. Which begins a series of flashbacks.

Nat had been living in the swamp, working for Old Doc. Old Doc was an abortionist but his main income was from selling little girls into white slavery. He’d been intending to sell Janeen. She would have fetched big money. Nat, who was basically a good-hearted guy, couldn’t bear to think of such a fate being in store for little Janeen so he rescued her and raised her as his own child. 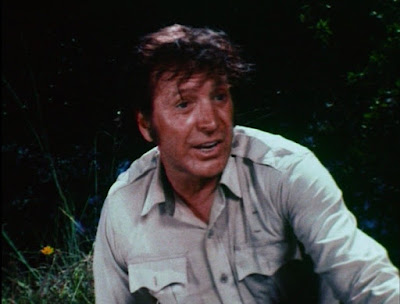 Back to the present day, and trouble is definitely coming for the swamp girl. Firstly in the form of Carol, who has just busted out of a women’s prison farm, killing a guard in the process. Carol and her boyfriend are heading to the Florida state line and they decide that the best way to get there is through the swamp, on foot. Which is of course a seriously bad idea. Their only chance is to persuade the swamp girl to lead them out. If Janeen represents purity and innocence then Carol represents evil and depravity. She’s a stone-cold killer.

The other complication is that Carol’s dad Gifford Martin (who’s a bad ’un) has hired three rednecks to find Carol and they’re heading off into the swamp as well.

There’s quite a body count in this movie, but most of them fall victim to venomous snakes or gators. Yep, one of the characters gets eaten by gators. 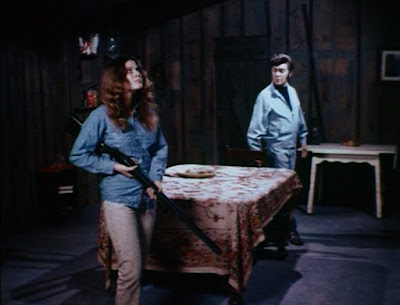 There’s also a reasonably good cat fight between Janeen and Carol which will appeal to mud-wrestling fans (although I hasten to add that both girls are fully clothed).

Director Donald A. Davis had started his career as a production assistant on Ed Wood’s Plan 9 from Outer Space. Not exactly an illustrious start. He went on to direct a number of sexploitation features. He was technically a bit more competent than Ed Wood, but only a bit.

Simone Griffeth is quite good as Janeen but the rest of the acting ranges from adequate to pretty terrible. 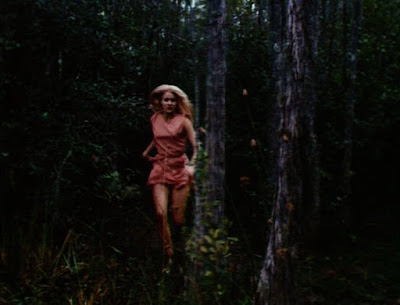 The transfer on this one isn’t sensational. It’s a bit dark and a bit murky. Apart from the second feature Swamp Country the extras include a 25-minute short film, Swamp Virgin, which is actually which is actually a very heavily edited version of a 1947 feature called Untamed Fury.

Swamp Girl is somewhat in the style of the hicksploitation movies of an earlier era such as Louisiana Hussey. Of course if you want hicksploitation done really well you can’t go past Russ Meyer’s deliciously steamy Lorna and Mudhoney.

I quite enjoyed Swamp Girl but I have a high tolerance for bad low-budget movies. There’s some great location shooting and it’s kind of fun if you’re in the mood. Worth a look if hicksploitation is your thing.

"Director Donald A. Davis had started his career as a production assistant on Ed Wood’s Plan 9 from Outer Space"

Now THERE'S a review I'd love to read!