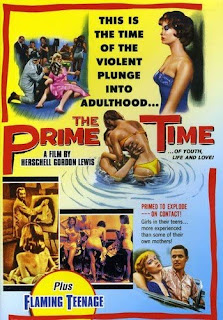 The Prime Time is a 1960 low-budget American exploitation movie which is one of those “these crazy teenagers today” movies.

Jean Norton (Jo Ann LeCompte) is seventeen and she’s running with a wild bunch and she’s out of control. These kids stay out all hours of the night (sometimes after ten o’clock) , hanging out, listening to rock’n’roll and drinking soda pop like it’s soda pop. This kind of immorality is bound to lead to consequences.

Jean’s parents think she’s dating a nice boy named Tony (James Brooks) but Tony is just a blind. Tony drives her to the Golden Goose Lounge and from there she meets her real boyfriend, a detective named Mack. Tony isn’t happy with this arrangement because he’s sweet on Jean but she isn’t interested in him. Jean and her cop boyfriend often rendezvous at the Beard’s pad. The Beard is a crazy cat who’s more or less a beatnik and he’s a painter, which is every bit as bad. And he paints pictures of women without any clothes on.

The trouble starts one night when Tony drops Jean off as usual but the cop boyfriend can’t make the date so he tells her to go to the Beard’s pad. 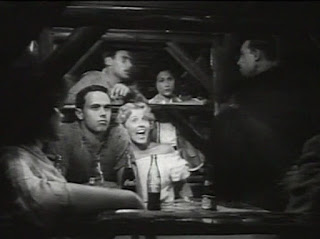 Jean, being a crazy out-of-control teenager, asks the Beard to do a nude painting of her and then things get really out of control.

Tony is in a real bind. He’s gone to the Golden Goose to meet Jean and take her home but Jean doesn’t show. Tony goes off looking for her but all he finds is her car, abandoned.

Tony’s parents and Jean’s parents are plenty mad but they don’t seem to know what to do. So Tony and his friends decide to play detective. They’re going to find out where Jean has gone to. 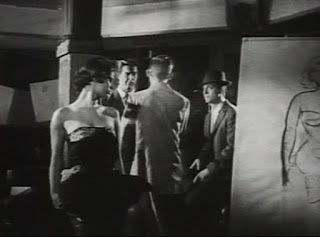 Curiously enough although the parents call the cops the cops don’t seem to do anything at all so all the detecting is done by the teenagers.

We know Jean has landed herself in deep trouble but we don’t know how deep. Maybe she’s lying dead somewhere, maybe she’s left town (as she’s been threatening to do).

This movie was made just about the time that the sexploitation was boom was starting. The fist nudie-cuties had already appeared. The Prime Time isn’t quite a nudie-cutie but it does feature some nudity when the kids go skinny-dipping in the lake. 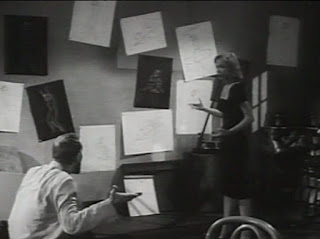 James Brooks, who plays Tony, looks very much like Stephen Brooks (the star of the early seasons of The F.B.I.) - in fact he looks so much like him that I suspect that either he is Stephen Brooks, or maybe his twin brother).

Jo Ann Le Compte is OK as the wild child Jean. She’s supposed to be seventeen but she looks like she’s closer to thirty. Ray Gronwold is reasonably effective as the sleazy beatnik painter. Look out for Karen Black in a small rôle. Apparently her nude scenes were cut from the final print.

This movie was produced and co-written by Herschell G. Lewis and it’s sometimes believed that he directed it. That doesn’t appear to be the case. The credited director is Gordon Weisenborn. The directing is pretty uninspired but it’s nowhere near dull enough to be a Herschell G. Lewis film. The legendary David F. Friedman also had a hand in the making of this movie. 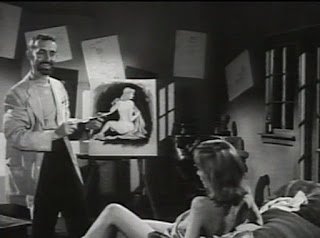 Alpha Video have paired this with another “these crazy teenagers today” movie, Flaming Teenage, on a single disc. The transfer is fullframe (which is quite correct) and it’s fairly typical Alpha Video quality - it’s a bit on the dark and murky side and image quality is none too sharp. But it’s quite watchable.

The Prime Time isn’t very good but it has some camp appeal and some amusement value and some actual rock’n’roll. And it’s an interesting look at how youth culture was perceived in 1960. It’s enjoyable enough if you dig this sort of stuff and you’re in the mood.