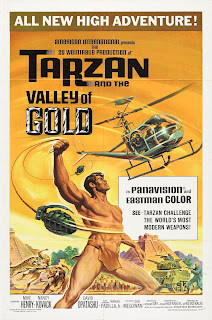 Tarzan and the Valley of Gold, shot in Mexico and released in 1966, was the fifth of the seven Sy Weintraub-produced Tarzan films. It was the first of former pro footballer Mike Henry’s three appearances as Tarzan.

In 1958 Weintraub took over the Tarzan franchise and it soon became obvious that he was going to take a completely fresh approach. Tarzan was no longer going to be a man who could barely speak English and had little understanding of the modern world. He was going to be much more like the character originally created by Edgar Rice Burroughs - a well-educated well-spoken man caught between two worlds, a man who understands the world of the jungle but who also understands the modern world perfectly well.

Weintraub also had little patience with the idea of making cheap black-and-white Tarzan movies filled with sometimes rather iffy stock footage. He was going to spend some real money. He was going to have the films shot in colour and on location. Weintraub’s Tarzan would also be a globe-trotter. If you’re going to justify spending the money to shoot on location you have to use different locations if you want to keep audiences interested. Weintraub didn’t just want to keep audiences interested - he wanted to keep them excited. And to a very large extent he succeeded. The success of his Tarzan movies led to his making the Tarzan TV series.

In retrospect Weintraub’s new approach was, on the whole, an extremely good idea. He really did revitalise the franchise.

In 1966 he decided to go even further. Tarzan and the Valley of Gold would be a James Bond-style adventure. When we first see Tarzan he is getting off an airliner wearing a sharp business suit. Nobody is staring at him or laughing at him. He looks comfortable and self-assured and not the least bit out of place.

We do however soon find out that Tarzan has not forgotten the lore of the jungle. There’s a car waiting to pick him up at the airport. And Tarzan smells blood. There’s no blood in the car but there has been blood in its vicinity, so he knows something is wrong. He’s not taken by surprise when he gets ambushed. We then get an action set-piece that is not only very much n the Bond style, it’s an extremely good Bond-style action set-piece.

Of course this is a Tarzan movie so don’t worry, eventually our hero is going to find himself in the jungle.

The Mexican authorities have asked for Tarzan’s help because a small boy walked out of the jungle with a story of a hidden treasure of gold. The boy was taken in by Tarzan’s old friend Ruiz but master criminal Augustus Vinero (David Opatoshu) has heard the tale of gold and has tried to kidnap the boy. The Mexican authorities are afraid that when Vinero finds the hoard of gold he will mercilessly slaughter the people of the little boy’s village.

Vinero does succeed in kidnapping the boy and kills a bunch of people in the process. Which means Tarzan is going to be heading into the jungle to rescue the boy and settle accounts with Vinero. The Mexican police offer Tarzan fifty armed men but Tarzan calmly informs them that he has all the help he needs - he has a scout (a chimpanzee), a guide (the little boy’s pet leopard) and he has an army (a lion named Major). Of course those are all African animals but that is easily explained - Tarzan’s friend Ruiz has a small private zoo.

Tarzan is ludicrously confident that all he needs is a length of rope, a hunting knife and his three animal companions to take on a small private army of bad guys equipped with a tank, a half-track, a helicopter and an arsenal of modern weapons. But Tarzan turns out to be right. It’s the bad guys who are going to be in trouble.

Vinero has some definite Bond Villain characteristics. He’s motivated by greed but with some Bond Villain megalomaniacal tendencies as well. He’s more than just a straightforward crook of the type common in Tarzan movies. And he has a liking for murderous gadgets. He’s clearly crazy. David Opatoshu does fairly well in the rôle.

Mike Henry makes a pretty decent Tarzan. He looks the part. He’s a very convincing action hero. His acting is a bit on the basic side but his characterisation of Tarzan as the strong silent type, a kind of square-jawed action hero, works pretty well.

One thing that’s interesting about this movie is that despite the Bond influence it’s played fairly straight and it does have a few grim moments.

All the Weintraub Tarzan movies have been issued on DVD in the Warner Archive series, available both individually and in a couple of multi-movie sets. Tarzan and the Valley of Gold benefits from a very nice anamorphic transfer and that matters because this is a visually fairly impressive movie. If you’ve only seen the Weintraub Tarzan movies on television you’re going to be pleasantly surprised by how good they look on DVD.

Whether it was really a good idea to try to make a Bond-style Tarzan movie is a matter of taste. I think it was an interesting idea that works better than might have been expected.

Tarzan and the Valley of Gold is a fine action-packed adventure movie. Highly recommended.