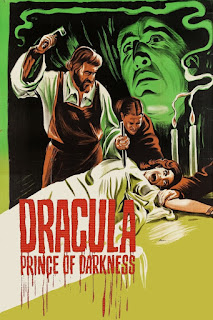 Dracula: Prince of Darkness was the first Hammer film I ever saw so obviously it’s a movie for which I have a definite soft spot.

You have to try to approach this movie the way audiences at the time would have approached it. By the end of the 60s audiences were accustomed to the fact that Dracula could never really be destroyed. A way would always be found to revive him for the next movie. But in 1966 reviving a vampire who has been destroyed was still a relatively novel idea. At the beginning of Dracula: Prince of Darkness we see Dracula reduced to dust. When the hapless English travellers arrive at his castle his servant mournfully informs that that his master is dead. Of course 1966 audiences knew that Dracula would make an appearance but they would have pleasantly mystified as to how the movie would manage this trick. Would the story be just a flashback to the days when Dracula terrorised the countryside or was there some possibility that somehow, impossible as it might have seemed, Dracula had found a way to cheat Van Helsing.

The movie encourages this mystification by taking its time in introducing Christopher Lee. This was a sound move. The return of Christopher Lee as the Count was the movie’s big drawcard so it was desirable to keep the audience breathlessly waiting, and to give Christopher Lee a memorable entrance.

And whatever method they came up with to re-introduce Dracula it had to be both convincing and striking. Terence Fisher manages to do it with real style. It’s a great set-piece.

One problem facing Hammer was the absence of Peter Cushing as Van Helsing. Finding a satisfactory replacement for such an iconic actor in such an iconic rôle would not be easy but Andrew Keir as Father Sandor proves to be a most worthy stand-in.

The movie takes place in pretty much the same imaginary 19th century central Europe as most of Hammer’s gothic horror films. Villagers, led by the village priest, are about to thrust a stake through the heart of a young girl who had died suddenly. Father Sandor, a monk from a nearby monastery, is outraged. He considers the villagers to be superstitious fool. They’re in a state of hysteria over a threat which was removed permanently ten years earlier.

So we have something interesting here - Father Sandor speaking as the voice of reason, logic and science but as we will soon find out he is also very much a man of faith. He’s one of the more interesting vampire-hunters in cinema, a mix of kindliness and ruthlessness.

Father Sandor encounters a group of English travellers - Charles (Francis Matthews), his wife Diana (Suzan Farmer), his elder brother Alan (Charles Tingwell) and Alan’s wife Helen (Barbara Shelley). The monk advises them to avoid a particular town, and if they must visit it they should on no account go near the castle. But they end up (thanks to a fairly cool plot device) at the castle anyway.

From this point on the movie essentially follows the pattern of Stoker’s novel and of the established classic Dracula movies. You know that Dracula will go after the women, and there will then be a struggle for the lives, and souls, of both women. Nothing startling and it adheres pretty closely to what was by then established vampire lore but it’s done with energy and panache.

Christopher Lee gets no dialogue and is really just a monster without any nuance. All he really has to do is to look like Dracula and strike a few suitably vampiric poses. It works. He seems much more menacing and much more relentless without dialogue.

Barbara Shelley was one of the great scream queens and she’s terrific here. She was an old school Hammer scream queen, less overtly sexy (although she was certainly a beautiful woman) and more lady-like. Her lady-like quality does add to the horror of her situation - Helen is not used to being out of control of events. The other cast members are all fine, with Thorley Walters being both creepy and amusing as Dracula’s slave Ludwig.

The most horrifying act in the movie is not performed by Dracula but by Father Sandor. It’s a scene that really hits home and Fisher doesn’t pull his punches. Fisher would certainly have agreed that Father Sandor’s action was justified and necessary but it’s a very disturbing scene.

Of course modern viewers might not view this scene in quite the same way Fisher intended. They might notice that at this stage Helen hasn’t done anything actually evil. Just being a vampire is enough to warrant destruction. If you see vampire stories as metaphors for sex (and it’s difficult not to see them that way) then you might think that the hostility of the vampire-hunters towards the vampires is motivated by a fear of unbridled sexuality, particularly unbridled female sexuality. But no-one would have seen it that way in 1966. On the other hand it's impossible not to notice that Dracula seems to have pushed Helen's sexuality into overdrive.

Terence Fisher wasn’t a flashy director but he really knew how to do gothic horror and he’s in top form here with a series of great visual set-pieces.

As always with Hammer in this period the movie looks much more expensive than it was with some very impressive sets. Hammer had been exploring other genres in the early 60s - contemporary psychological thrillers, pirate movies, adventure movies, swashbucklers. In 1966 they returned to gothic horror in a big way with three great movies in the genre - this one, The Plague of the Zombies and The Reptile. And Dracula: Prince of Darkness marked a triumphant revival of their Dracula cycle.
It looks great on Blu-Ray and the disc includes some worthwhile extras.

Dracula: Prince of Darkness isn’t the best of Hammer’s gothic horror films but it’s still very very good. Although you may, like me, find yourself having more sympathy for the vampires than for the vampire hunters. Highly recommended.
Posted by dfordoom at 21:57