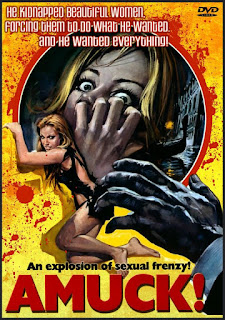 Amuck! (Alla ricerca del piacere) is an Italian giallo directed by Silvio Amadio, although whether it’s a true giallo can be debated.

Greta Franklin (Barbara Bouchet) is a young American who goes to Venice to work as secretary to American writer Richard Stuart (Farley Granger). What’s she’s really doing is trying to find out what happened to his previous secretary Sally (who was her best friend). Sally has disappeared but before she vanished she sent Greta a letter saying that she was caught up in a world of evil and perverse pleasures from which she could not escape. Greta figures that something bad has happened to Sally. Greta has no actual plan. She just hopes she’ll come across some clues. Commissioner Antonelli tries to tell her that what she’s doing could be very dangerous but of course she takes no notice of him.

Richard is definitely a bit worrying, and Eleanora is very worrying.

If I ever write a book of hints for movie heroines temped to play amateur detective my first piece of advice will be this - if you’re investigating a murder and you’re invited to join a hunting party politely decline. Plead that you have a headache.

After the hunting party Greta might have been well advised to just tell the police what she’s found out and then get as far away from Venice as possible. It’s becoming obvious that there’s a cat and mouse game being played and that she’s the mouse.

Is this movie a giallo? You have to remember that to the Italians any mystery/crime thriller novel is a giallo. In movies giallos in the ’60s and ’70s could be defined rigidly as crime thrillers featuring serial murders, black-gloved killers, psychological horror, explicit violence, lots of eroticism and lots of style but there were a lot of Italian movies that only included some of those elements that still tend to be thought of as giallos. If you define the genre broadly enough it can be any stylish Italian crime thriller (and most Italian crime thrillers of that period were stylish) that doesn’t fit into the poliziotteschi genre. You could say that poliziotteschi were crime/action movies dealing with organised crime and official corruption while giallos dealt with disorganised crime and personal corruption. Amuck! has the giallo feel without incorporating all the giallo ingredients.

Amuck! can also be considered to belong to the sub-genre of stylish 1960s/1970s thrillers (not necessarily Italian) set in Venice, along with movies like The Venetian Affair, Nicolas Roeg’s 1973 masterpiece Don’t Look Now and Who Saw Her Die?

In my review of Who Saw Her Die? I mentioned the ways in which it prefigures Don’t Look Now. There are also a couple in intriguing ways in which Amuck! also anticipates Don’t Look Now, in particular the suggestion that Eleanora can foresee the future. It’s not that Don’t Look Now is in any way a rip-off of these earlier Italian films (although it would be interesting to know if Roeg or his screenwriters had seen these Italian movies). I suspect it’s more a case of certain ideas and certain approaches being in the air in the early ‘70s. All three films to varying extents embody the zeitgeist of the early ’70s. And Don’t Look Now was based on a Daphne du Maurier story and du Maurier had had quite an influence on film-makers (Hitchcock adapted no less than three of her stories, Jamaica Inn, Rebecca and The Birds). In the case of Amuck! there are some other obvious Hitchcock influences (as there are in lots of giallos). There are some interesting similarities to Hitchcock’s Suspicion.

With both Barbara Bouchet and Rosalba Neri in the cast your first thoughts might be - will they take their clothes off? The answer is an emphatic yes.

While I’m not suggesting that there’s anything wrong with Barbara Bouchet’s performance (there isn’t) but in the acting department she is just a bit outgunned by Farley Granger and especially by Rosalba Neri. To be fair to Miss Bouchet Granger and Neri have much more interesting rôles. Granger and Neri deliver pleasingly ambiguous performances. They are both sexually depraved. Are they psychopaths? Are they mad? Are both mad, or only one of them? Does Eleanora have psychic powers? Is it possible that both are innocent of murder? That butler of theirs is a bit suspicious and there’s a huge local fisherman who seems to be in some way involved in the psychological and sex games being played out.

88 Films in the UK have release Amuck! on both DVD and Blu-Ray, with excellent transfers and quite a few worthwhile extras. There are interviews with both Rosalba Neri and Barbara Bouchet. Neri has fond and vivid memories of this movie. Bouchet talks about her career in general which is interesting - she is after all a very major cult star (which she is delighted by).

Amuck! does not have the extravagant style or the elaborate visual set-pieces to qualify as a top-tier giallo. It also features none of the gore associated with the genre, although it certainly has the necessary eroticism. While it has some scary moments they’re not quite scary enough. In other words hardcore giallo fans may be disappointed. It’s just a competently made murder mystery and as such it’s worth a look.
Posted by dfordoom at 15:29