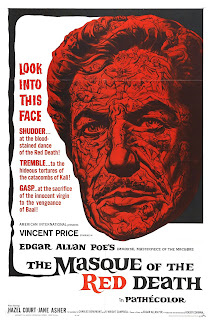 The Masque of the Red Death was the second-to-last of Roger Corman’s Edgar Allan Poe movies. Vincent Price stars (he starred in all but one of these movies). It was made in Britain in 1964 with a fine mostly British cast and with Nicolas Roeg doing the cinematography. Charles Beaumont and R. Wright Campbell wrote the screenplay.

Corman was a wizard at stretching a budget and this film manages to look a lot more expensive than it was.

Prince Prospero (Vincent Price) rules a medieval Italian city state and he rules it to satisfy his taste for decadence, cruelty and cynicism. And also to serve his master, Satan. Prospero’s nihilistic view of life is about to be uncomfortably confirmed. Plague has begun to ravage the land. It is the Red Death, which produces a red rash (followed by a lingering death).

Prospero and his nobles and hangers-on are safe in the prince’s castle, or so they assume. And Prospero believes that Satan will protect him.

Prospero has taken a pretty young peasant girl, Francesca (Jane Asher), away from her family. He is sure she will amuse him. Juliana (Hazel Court) does not share Prospero’s enthusiasm for the girl. She fears losing her place in the prince’s affections. She will do anything to prevent that from happening. Absolutely anything.

This is a movie that wasn’t really embraced by audiences at that time. There’s very little plot. This is not quite a normal horror movie. It’s all about atmosphere - the atmosphere of decadence and cruelty and the atmosphere of fear. Plague is a lot more terrifying than mere monsters. Prospero’s character is established, plague ravages the countryside, Prospero and his friends party and Prospero plans a great celebration, a masque. And then we get the inevitable ending. The entire plot could have been condensed into half an hour or less. While most horror movies up until the 70s relied more on atmosphere than gore audiences still expected some kind of dramatic payoff. They expected some mayhem and they expected monsters of some sort. It’s not surprising that this movie left them mystified and dissatisfied.

It’s not that it’s a bad movie. It’s a very very good movie, in fact a great movie, but it’s not the sort of movie that the mid-60s audience for such movies would have been prepared for.

It actually has just a hint of a European feel to it. There are some very obvious nods to Bergman’s The Seventh Seal. Corman was more arty as a director than his later reputation as a shlock producer would suggest. The Masque of the Red Death is almost a European art film, but aimed at the drive-in market.

This film truly has a wonderful cast. Patrick Magee is in top form as the cynical depraved courtier Alfredo. Jane Asher captures the wide-eyed innocence of Francesca. Hazel Court, one of the great scream queens, is as reliable as ever as the jealous and vindictive Juliana. There’s my old favourite Nigel Green as well.


And of course there’s Vincent Price, giving a performance with the hamminess toned down somewhat. It’s always important to remember that Price only gave so many hammy performances because that’s what was usually demanded of him. If a director wanted something more subtle he could certainly provide it and when he was being subtle he was a lot creepier. Compared to most of the directors he worked with Corman expected a bit more from Price and Price invariably delivered.

What’s interesting about Prospero is that he seems to get more pleasure from seeing the degradation of others than from any actual personal indulgences in sensual pleasures.

The use of colour in this film is extraordinary, particularly the differently coloured rooms each of which is intended to serve a different depraved purpose. And there is very little red in the movie. Prince Prospero abhors the colour red. It reminds him uncomfortably of the Red Death. When we get an occasional slash of red it has the desired impact. With Corman’s own keen visual flair, with Nic Roeg behind the camera and with Corman’s regular production designer Daniel Haller on hand you expect a visual feast and that’s what you get.

The best of Corman’s string of Edgar Allan Poe films - this film along with The Fall of the House of Usher, The Pit and the Pendulum, The Haunted Palace, The Premature Burial and The Tomb of Ligeia - constitutes one of the most impressive cycles of gothic horror movies in cinema history. It’s certainly worthy of comparison to the Universal horrors of the 30s and to the Val Lewton RKO horror films of the 40s. Corman was quite ambitious as a director and with these movies he tried not to keep repeating himself. The Pit and the Pendulum is classic straightforward horror, The Fall of the House of Usher is a moody exercise in gothic doom and The Masque of the Red Death is full-on decadence (with perhaps an anticipation of where the 60s counter-culture was going to end up going).

The Masque of the Red Death is the most impressive of all the Corman Poe films. Very highly recommended.

Agreed, this is the best of the Corman Poe films, and absolutely a beautiful film.

I just read that there's a new release with additional footage coming soon. I'm really looking forward to that.

I'll have to keep a lookout for that release as well. Thanks for the heads-up.