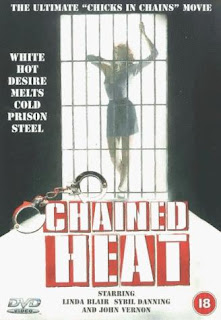 Chained Heat, directed by Paul Nicolas and released in 1983, has the reputation of being one of the tougher and more sleazy American women-in-prison films. I was a bit sceptical about this but yes, it is pretty tough and pretty sleazy. It was released on DVD a few years back as part of a three-feature women-in-prison boxed set from Panik House. The other two movies in the set are Red Heat (another Linda Blair WiP outing) and Jungle Warriors. I think the set is technically out of print but new copies can still be obtained without too much trouble.

Carol Henderson (Linda Blair) has been sentenced to 18 months in prison for manslaughter. Carol is really just a fairly ordinary girl who got real unlucky. She’s no hardened criminal and she is totally unprepared for life behind bars. Especially in this particular prison. The prison is awash with drugs, which is hardly surprising since the warden and most of the guards are dope pushers.

There’s also a simmering race war. Murders are frequent. Rapes (committed by one of the male guards) are par for the course. And if you’re wondering if this movies includes that staple of the women-in-prison genre, predatory lesbians, you won’t be disappointed.

The latest murder victim is a girl who’s been acting as a snitch for the Warden Bacman (John Vernon). The warden decides that he has to have a snitch (if only to keep an eye on rival drug-pushing operations) and that Carol might be a suitable choice. Carol is so naïve that she is tempted. 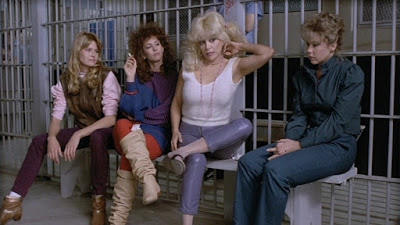 There are numerous power struggles going on, the most notable being that between Duchess (Tamara Dobson), the de facto leader of the black prisoners, and Ericka (Sybil Danning), the de facto leader of the white prisoners. Captain Taylor (Stella Stevens) is not only mixed up in the power struggles she’s also involved in a romantic relationship with Lester (Howard Silva) whose job in the dispensary makes him a drug king pin. It’s a romantic relationship which probably won’t end well for Taylor.

Carol’s other problem is that she’s fresh meat and she’s attracted the attention of Ericka who is always on the lookout for pretty innocents.

Poor Linda Blair has never received much respect as an actress but she’s actually pretty good. She’s convincingly naïve and convincingly confused and terrified. Stella Stevens gives the standout performance of the movie as the corrupt Captain Taylor whose judgment is clouded by her unwise passion for Lester. Both Blair and Stevens take their rôles seriously and give their respective characters a bit of nuance. Blair handles her character’s slow transformation extremely well. Carol never becomes a tough girl but she becomes tough enough to have a chance at survival. 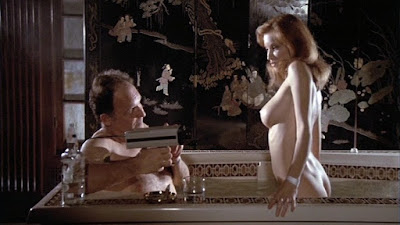 Linda Blair was an interesting casting choice because she’s not really a glamour babe, she just looks like a very ordinary reasonably attractive young woman. She was presumably cast largely on the basis of her notoriety as the star of The Exorcist but she has to rely on her acting rather than on her glamour or her willingness to take her clothes off (although she does have a couple of mild nude scenes). Fortunately she actually can act.

The other players go totally over the top but they do so very entertainingly and their performances work because it is a deliberately excessive movie about extreme subject matter and subtlety probably wouldn’t have worked.

John Vernon is a delight as the sleazy warden who has a jacuzzi in his office and likes to film himself having sex with a procession of female prisoners. Sybil Danning is deliciously nasty and deliciously sexy. 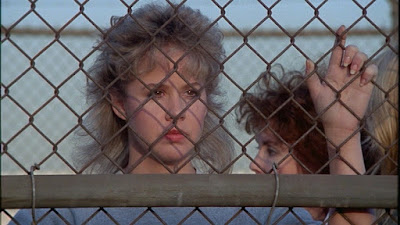 This movie contains every single exploitation element that you expect from this genre. There is of course a shower scene, with copious frontal nudity. There are vicious cat fights. There’s a rape scene which isn’t very graphic but it’s made rather chilling by the obvious enjoyment being obtained by the female guard who watches it happen (and who in fact set up the girl to be raped). There’s also a prostitution ring being run from the prison, more rapes and lots of reasonably graphic violence. And some imaginative killings.

This is one of those movies that seems to be pure exploitation but at the same time gives the impression that those involved really were trying to make a good movie.

Don’t expect too much complex political messaging. Insofar as there is a message, you could say that it’s simply that power corrupts, and it corrupts the victims of power as well as those wielding the power. But it’s really not a political film. 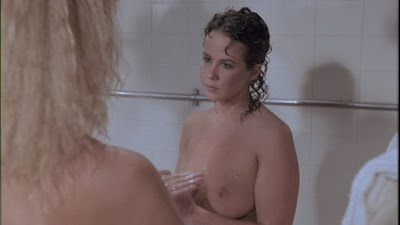 The most interesting characters are Duchess, Ericka and Carol’s friend Val (Sharon Hughes) because they’re neither heroines nor villainesses. They’re just doing what it takes to survive and they’ll form temporary alliances based on self-interest. It can be very useful to have Ericka on your side but it’s wise to remember that she’s still a scheming murderous bitch. The question is whether she’s going to be a scheming murderous bitch on the side of the good guys or the bad guys. Val at least does have one redeeming feature - her friendship for Carol is genuine and it’s the only genuine human relationship in the movie.

The anamorphic transfer is very good. This was supposedly the first opportunity that Americans got to see this film uncut. The extras include interviews with Stella Stevens and Sybil Danning and a brief introduction by Mr Skin (who apparently runs a celebrity nude website).

Chained Heat is certainly the best American women-in-prison movie I’ve seen, and the only American WiP movie that can stand comparison with the classics of the genre such as Female Prisoner #701: Scorpion. Chained Heat is sleazy fun and it’s highly recommended.