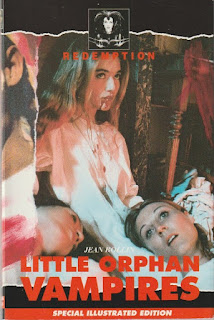 Rollin was a huge fan of the French movie serials and of the 19th century and early 20th century pulp fiction serial stories known as feullitons.

Little Orphan Vampires was the first of a series of six short novels dealing with two blind orphan girls who are vampires. In 1997 Rollin returned to film-making with his movie version of the tale, under the title Two Orphan Vampires.

Henriette and Louise are blind orphan girls living in an orphanage. No-one knows where they came from or even if they’re sisters or not. The kindly Dr Dennery, an eye specialist, decides to adopt them. He is genuinely moved by compassion but he is also fascinated by the case since there is no apparent physical cause for the girls’ blindness.

On the night before they leave the orphanage we discover several odd things about these young orphans. Firstly, that although they are completely blind during the day they can see very well at night. Secondly, they feed on blood. Thirdly, they are killers.

Leaving Dr Dennery’s house for nocturnal adventures is not difficult. The kindly doctor never imagines for one moment that two blind girls could or would sneak out of the house so it never occurs to him to check that they remain in their bedroom at night. Their favourite huntings grounds are cemeteries. They’re smart enough to pick victims who are vulnerable enough to be overpowered by two young girls. Their biggest advantages as huntresses is that one of them suddenly appears to a prospective victim that victim is unlikely to be on his or her guard against a poor little blind girl.

When they’re not hunting they indulge in bloodthirsty fantasies about being Aztec goddesses. It’s a lifestyle that suits them although eventually they grow bored and start to take greater risks.

The conventional vampire lore was firmly established by the 1930s, by both books and movies. Vampires were immortal creatures, neither dead nor alive, they fed on blood, they feared religious symbols, they abhorred garlic, they slept in coffins, daylight was dangerous or even fatal to them. By the 1970s vampire fiction and vampire movies were starting to play around with these conventions. In 1971 in his film Vampyros Lesbos Jess Franco gave us a lady vampire who loves sunbathing.

Rollin played all sorts of games with the conventions of the vampire genre and in Little Orphan Vampires the exact nature of Henriette and Louise is very ambiguous. Are they vampires or murderesses? They drink blood, but do they need to do so? They can go out in the daylight but they are helpless due to their day time blindness. Is the strange fact that they are blind during the day but have excellent vision at night a sign of their supernatural natures or some rare medical condition? Are they immortal? They seem physically normal in most respects. Are they vampires or is it just a shared delusion?

Rollin’s movies are often regarded as belonging to the lesbian vampire sub-genre but that’s quite misleading. The eroticism in Rollin’s films is too diffuse for such a categorisation. Are Henriette and Louise lesbians? They certainly do not have sex with each other (or with anyone). Their close emotional bond could be explained just as easily by the likelihood that they are sisters (or believe themselves to be sisters in some mystic sense). The book has a sense of strange unhealthy eroticism but it’s a kind of non-sexual eroticism.

They are both evil and innocent. They do not see themselves as having any connection with any human beings other than each other. They cannot comprehend the idea of morality, or of any emotion apart from their fierce devotion to one another. They are complete outsiders. They enjoy killing, with a simple animal pleasure.

Rollin was always fascinated by female doubles. His protagonists are frequently two girls who might be sisters, or they might be lovers, or thy might be something else entirely. They might be two halves of a single personality. Or reflections of each other. Rollin liked to keep the true nature of these female doubles as mysterious as possible.

Rollin was enormously influenced by the surrealists and his films do have definite art-house credentials. He was just as influenced by trashy pulp fiction serials. He had a sensibility that combined pop, pulp and artiness. You’re not really going to appreciate this novel unless you accept this. Little Orphan Vampires is as literary as it is trashy.

Little Orphan Vampires has been published in an English translation by Redemption. It’s a great pity that the subsequent books in the series have not yet been translated.

If you like your vampire fiction as weird and unconventional as possible but you still demand that it should be fun then Little Orphan Vampires is worth seeking out. Highly recommended.
Posted by dfordoom at 04:30