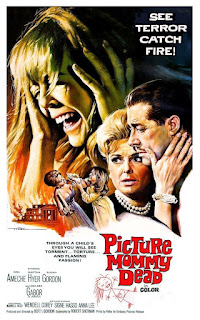 Picture Mommy Dead is a 1966 horror thriller produced and directed by Bert I. Gordon.
Edward Shelley (Don Ameche) and his new wife Francene (Martha Hyer) go to collect Edward’s teenaged daughter Susan (Susan Gordon) from the convent where she’s been since the accident. It’s actually more of a mental hospital than a convent. The accident was a fire in which Susan’s mother Jessica was killed. At the time of the accident Francene was Susan’s governess.
Jessica had been very wealthy and she made a complicated will. Susan was left a vast fortune but it’s tied up in trust until she’s 25. Edward was left a sizeable sum plus the paintings and furnishings of Jessica’s palatial house Flagmore House. The house itself was left to the state with the proviso that it would not pass to the state during Susan’s lifetime as long as Susan is willing to live there.
There are further complications. If Susan dies or goes permanently insane the fortune goes to Edward. If Edward dies everything goes to Jessica’s cousin Anthony (who was left a measly five hundred dollars in the will).
And Edward is broke. He’s spent all the money Jessica left him so he wants to sell off all the paintings and furnishings of Flagmore House. He manages to persuade Susan to agree to this, much to the disgust of the family lawyer, Clayborn (Wendell Corey). 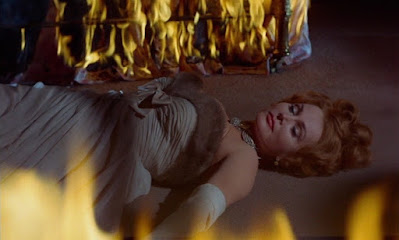 That will clearly has plenty of potential to cause trouble.
It soon becomes very obviously that each one of the major characters could have had a motive for killing Jessica (we don’t believe for a moment that her death was an accident). They also have good motives for killing each other. Edward, Francene and Anthony are all morally corrupt in their own ways. And then there’s Susan, who seems like a nice young girl but she is clearly disturbed and could be totally innocent or a homicidal maniac. What’s also interesting is that while it’s possible that one or more people are trying to drive Susan insane, she may or may not be already insane. Or she may be completely sane but simply unable to remember the events of that fateful night.
There are major sexual and romantic complications to add extra layers of motivation. And extra layers of perversity. Major league perversity. 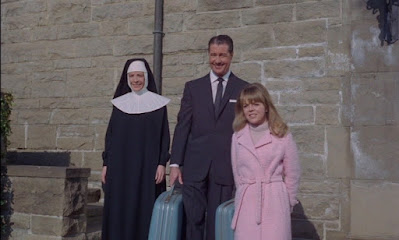 There’s a hint at the beginning of the film as to the solution but it’s a cleverly ambiguous hint and you don’t want to make the mistake of drawing too many conclusions from it.
In fact you don’t want to make that mistake at any stage in this film. Some elements are predictable enough but there are other elements that are truly devious plot twists and the ending is one of the great endings in cinema history. And no, I’m not exaggerating. It’s seriously brilliant and twisted.
Andy Warhol once said that in the future it will be possible to be famous for being famous. Zsa Zsa Gabor had already achieved this. Her film career amounted to very little but she was very very famous indeed for being Zsa Zsa Gabor. What she adds to this film (her rôle consists entirely of flashbacks) is her presence and her notoriety. 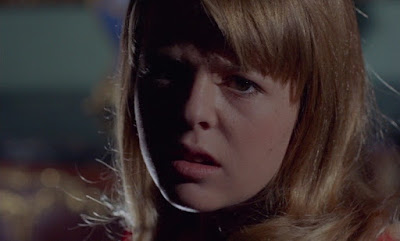 Susan Gordon, the daughter of Bert I. Gordon, had a brief career as a child star. Picture Mommy Dead was her final film rôle. The character she plays in this film is supposed to be a teenager (I’d assume she’s supposed to be about fifteen) and it was a bold move casting a 17-year-old actress since it’s quite a demanding rôle. Susan Gordon carries it off exceptionally well. It’s a pretty extraordinary performance. She just nails it.
Don Ameche had been a fairly big star in the 30s and 40s but made only a handful of movies after that until staging a major late comeback in the 80s. He’s very good here. Martha Hyer adds glamour and perversity and it’s appropriate that she’s the same physical type as Zsa Zsa. Maxwell Reed as Anthony is deliciously slimy as well. Wendell Corey’s rôle is very brief, not much more than a cameo, but he makes the most of it as the most cantankerous lawyer you’ve ever seen.
I’d always assumed that Bert I. Gordon was just a hack director of schlocky B-pictures but clearly I was wrong. He does a great job here. This is a very well-crafted movie and it has some very nice visual moments (and lots of symbolism). Robert Sherman’s screenplay has an intriguingly cyclical touch to it. Events repeat themselves, but do they repeat themselves exactly? 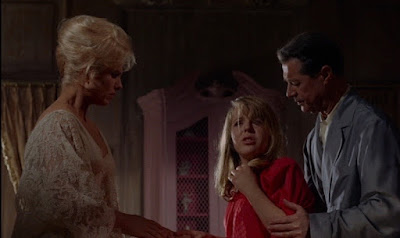 While the ending is a shock if you watch the movie a second time there are definite clues pointing in that direction.
Apparently the movie encountered no major censorship issues. I can only assume that the censors simply didn’t understand what the movie was about. If they had understood they’d have gone crazy.
Picture Mommy Dead has been released on both DVD and Blu-Ray by Kino Lorber, with an audio commentary (by Howard S. Berger and Nathaniel Thompson). It’s a movie that really benefits from the commentary since there’s a surprising amount to unpack in this movie.
Picture Mommy Dead is just a wonderfully twisted motion picture. There’s just enough of a camp sensibility and there’s a lot of outrageousness. Very highly recommended.
I discovered this movie through a review at Michael’s Moviepalace.
Posted by dfordoom at 17:41

Thanks for the review - I don't think I'd ever heard of this, and probably wouldn't have given it a second glance until I read this. Will definitely try to get hold of it.

tom j jones said...
Thanks for the review - I don't think I'd ever heard of this, and probably wouldn't have given it a second glance until I read this. Will definitely try to get hold of it.

I'm looking forward to hearing your thoughts on this one.

I have to admit that I never knew that this was part of Mr. B.I.G.'s resume, and while I've seen references to it here and there, I've never watched it (that I can remember, and it sounds like I'd remember it). Obviously Bert tried to cash in on the wave of psycho-thrillers that flooded theaters after the success of Psycho, and it seems he succeeded artistically if not financially. I was interested to see that Gordon's daughter Susan was in this one as well -- she was very natural and very good in Gordon's ghost picture Tormented when she was around 10 years old. A born actress!

Brian Schuck said...
I was interested to see that Gordon's daughter Susan was in this one as well -- she was very natural and very good in Gordon's ghost picture Tormented when she was around 10 years old. A born actress!

It's sad that Picture Mommy Dead was pretty much the end of her acting career. She really was very good.

Well, that was ... interesting!

It took me a while to get into it - it didn't help that I recognised the house from other things (at least one Columbo, for a start), so that distracted me - until I realised that Maxwell Reed was literally doing a complete homage to/rip-off of Boris Karloff as the possibly-mad relative!

The film is very inventive, much more than I expected - I'm not familiar with Mr B.I.G.s work. The actors are all watchable and competent at the very least - it's very well cast, and Gordon is amazing.

I had an issue with the ending - not the main resolution, which is really creepy, especially for 1966; I wonder what Don Ameche (I'm a fan) felt when he read the script! But something happens that doesn't match the dialogue ...

I got the Blu Ray, so will definitely be playing this again with the commentary. Thanks for the recommendation!