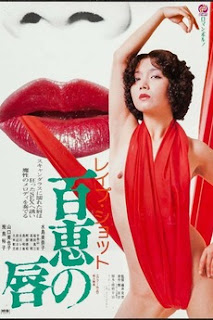 Tôru Miyake (Noriaki Abe) is a journalist working for a scandal sheet. His specialty is scandals involving the entertainment business. It pays well if you have no ethics and don’t mind being the journalist equivalent of a cockroach, and Tôru cheerfully describes himself as a cockroach.

He’d like to go after Momoe but going after her could be very injurious to one’s health. That’s the only mention of Momoe in the movie. Apparently it refers to a real-life pop star. I’m sure she was thrilled to have her name associated this film, and even more thrilled by a slightly later film called, wait for it, Molester Train: Momoe’s Butt.

Tôru decides instead to go after Yôko Miki (Minako Mizushima). She’s the latest singing sensation and her career is being managed by Mr Hoshino. There are rumours that Hoshino keeps his young female singing stars pliable by pumping them full of drugs. Tôru thinks he has a way of finding out if this is true or not (we’ll come back to this later).

Tôru discovers that poking his nose into Mr Hoshino’s business can be pretty injurious to one’s health as well.

Then Yôko gets kidnapped. Tôru isn’t sure whether it’s some stunt on Mr Hoshino’s part of if the kidnappers are part of someone else’s scheme or whether they’re just crazies. He doesn’t care. There’s a great story in this and that will improve his bank balance.

Tôru thinks he can get a lead from a friendly whore. He doesn’t get the information he wants but she does give him a good time. And at discount rates.

Meanwhile Yôko is not having a good time. She’s getting raped by three crazies, including an odd young man known as Dragonfly. Dragonfly is actually a big fan of Yôko’s. He has all her records. He worships her. That doesn’t stop him from raping her. Some fans do carry things a bit too far.

There’s one thing that puzzles Tôru. He is convinced that Yôko is injecting drugs (or perhaps is being forcibly injected with drugs) but he can’t find any needle marks on her. And he examined every square inch of her body. Yes, every square inch. Yes, even there. No needle marks. In fact Yôko is being injected with drugs but the method by which it’s done provides one of the movie’s many shocking moments.


The violence is non-stop. It’s not just the crazy kidnappers and Mr Hoshino’s goons getting violent. Other extraneous characters wander into the film simply for the purpose of beating up Tôru or getting beaten up by him. There’s a lot of sex, some of it consensual. Even the consensual sex is fairly sleazy. You may want to take a shower after watching this movie. The rape scenes are not particularly graphic but they are shocking and brutal. If you’re sensitive to such things then this is not the movie for you.

Tôru may be the most unsympathetic protagonist in cinema history. He’s not an anti-hero, he’s just a sleazebag. There are no heroes in this story. Just nasty cynical violent people out for their own interests. The ostensible heroine (or victim) is not exactly a paragon of virtue either.

It’s a movie that does manage to go places that I personally had never even thought of. When Tôru follows Yôko into the ladies’ room, follows her into the stall, slams her up against the wall and pulls her panties down you figure you know what’s going to happen next. And you’d be totally wrong. What he’s actually trying to do is collect a urine sample from her. He’s performing a kind of impromptu drug test.

The acting is more than adequate. These are not nice characters but Noriaki Abe and Minako Mizushima manage to give Tôru and Yôko just a little bit more depth than you’d expect.

Once you get past the sex and nudity there’s an effective and nasty little hardboiled crime story here with some very noir touches.

The Impulse DVD offers a very good anamorphic transfer. The only extra is in the shape of liner notes from Jasper Sharp.