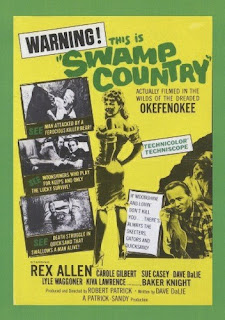 Swamp Country, a very low-budget 1966 effort filmed in the swampland of Florida, is a hicksploitation movie but it belongs to that fascinating sub-genre that could perhaps be called swampsploitation. Most were set, and shot, in the Okefenokee Swamp and a better setting for an exploitation movie would be hard to find.

Swamp Country has a couple of plotlines going on, one involving an aspiring country singer and a local gal and the other involving a woman from the city who is sent to a one-horse town on the edge of the swamp for some purpose that I must confess remained something of a mystery to me except that the guys sending her appeared to be mobsters. Before she leaves she is warned to stay off the sauce but of course as soon as she books into a motel she heads straight for a bar and gets thoroughly plastered. She gets back to her motel room and promptly gets strangled.

The poor schmuck in the room next door, a big guy called Dave Wetzel, gets arrested for the murder. There’s not a shred of evidence against him but that doesn’t bother the local sheriff. Wetzel, figuring he hasn’t got a hope of getting justice, escapes. And heads straight for the swamp where of course he has no chance of survival. There isn’t a character in this movie who isn’t as dumb as a rock.

Despite the fact that they have zero evidence against him the sheriff and the townsfolk decide to hunt Dave down and they clearly are not too worried about taking him alive. He’s from the city after all, so he’s probably guilty of something. They have guns and dogs and they’re going to get some sport.

But now we get a surprise twist. It wasn’t so dumb for Dave Wetzel to head for the swamp after all. He just happens to be an expert in jungle survival techniques. Hunting him through the swamp turns out to be more dangerous for the hunters than the hunted. Mostly it’s dangerous because the guys in the posse are incredibly dumb. Dave doesn’t have to kill them. They just get themselves into trouble. It’s as if they’ve lived next door to the swamp all their lives but have no idea of the perils that lurk there. For example they apparently have no idea that there are bears in the swamp.

The hunt through the swamp could have provided some real excitement but suddenly the movie loses interest in it and starts to focus on the romantic triangle between Nora Cox (who lives with her kid sister and alcoholic mother), Sheriff Jim Tanner and would-be country music star Baker Knight. The Sheriff is old enough to be Nora’s dad, or at least that’s what we’re told (actually actress Carolyn Gilbert is much too old to play the role).

This is not just a swampsploitation movie, it’s a musical swampsploitation movie. We get quite a few songs, all of which you’ll want to forget as quickly as possible. Baker Knight plays himself. He really was an aspiring country music star and he really did make the big time. I didn’t like his songs, but your mileage may vary.

The romance sub-plot slows down the action and there’s another sub-plot as well, which has Baker kidnapped by gangsters. There’s an attempt to tie the swamp hunt and romance sub-plots together at the end. The tying together of sub-plots doesn’t work too well but that’s part of the movie’s charm. It has an engaging amateurishness to it. This is regional exploitation cinema which was a big thing at one time. Low-budget movies like this were made purely for regional drive-in markets (where they did good business) and mostly never played markets like New York and LA.

Which means that when judging a movie like this you have to keep in mind the audience at which it was aimed. They loved seeing city folks hunted through swamps, they loved sentimental country music and they loved corny romance.

Bad acting is usually a plus in movies such as this but it has to be the right sort of bad acting. In this case the performances are a bit too wooden. Surprisingly some of these people (like Lyle Waggoner who plays a deputy) went on to have actual careers.

David DaLie (who plays Dave Wetzel) wrote the screenplay. This movie seems to be producer-director Robert Patrick’s sole feature film directing credit. Which is not surprising since it’s a pretty amateurish effort.

Something Weird have paired this one with Swamp Girl in a swamp double-header release. The transfer for Swamp Country isn’t that great. There’s quite a bit of print damage. But then we should be grateful that movies such as this have survived at all.

Swamp Country is a bit of an incoherent mess but devotees of low-budget regional movies will find it has a certain odd charm.
It was shot in colour and in the ‘scope aspect ratio which was unusual for such a low-budget movie at this time.