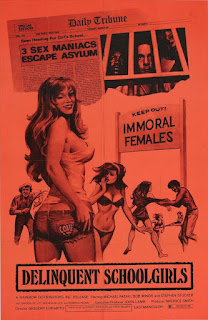 Delinquent Schoolgirls (AKA The Sizzlers AKA Carnal Madness) is a delirious slice of drive-in movie madness.

Three sex offenders escape from a hospital for the criminally insane. One is a gay theatrical type. Then there’s Big Dick Peters (Bob Minor), a flasher and rapist. The leader of the trio is Carl (Michael Pataki), another show business type. He’s a failed impressionist. He apparently just likes scaring people.

The first stop after breaking out is a farmhouse. Earl’s wife Ellie is very sexually frustrated so she’s delighted when Big Dick rapes her. This is a very politically incorrect movie. Earl doesn’t really mind. He’s quite happy that someone else is satisfying Ellie’s sexual urges.

Their next stop will be a girls’ school, but it’s a kind of reform school. These are all bad girls. We know they’re bad girls because they talk about sex a lot and wear very short skirts. They read dirty books and giggle. This being a girls’ school there is of course some lesbian activity among the girls, but nowhere near as much as you might expect in a 70s movie of this type.

Before the lunatics get there an incident takes place which gives us a hint of the flavour of this bizarre movie. One of the girls is hopelessly in love with a middle-aged biology teacher. He asks her to help carry some books home. It might have ended there had she not bent over and given him a fantasising glimpse of her panties. So he drugs her, hypnotises her and removes her clothing, not realising that she would have enthusiastically consented. 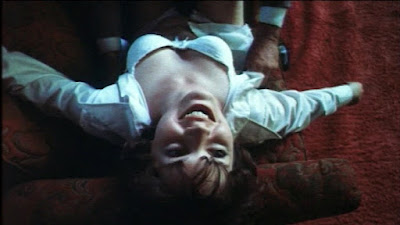 The movie is a succession of incidents in which the lunatics become involved. These incidents range in tone from disturbing to weird to goofy slapstick to just plain incomprehensible.

Some of the episodes just go nowhere. A girl from the school, after undergoing a harrowing experience at the hands of the escaped lunatics, flags down a passing van. In the van are two very sleazy hippie types who seem much more interested in her naked breasts than in helping her. We feel that something bad or disturbing is going to happen here. And what actually happens? We have no idea. It’s as if the director simply forgot about that subplot.

Some episodes achieve true inspired weirdness. The creepy middle-aged biology teacher drugs and hypnotises a girl who has a crush on him. He strips her down to her bra and panties. He has her completely under his power. Now you can well imagine what is going to happen next, but that’s not what happens at all. Presumably he is unable to, er, consummate his lust for the girl. So he gets his pet snake to do it for him. At the moment that this scenario is interrupted by the arrival of the loonies the snake is heading for the girl’s, well I’m sure you can guess what part of her anatomy it’s heading for. 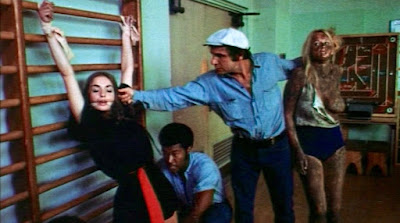 Other episodes leave you wondering whether the director was indulging in some mind-altering substances and just had no idea what he was doing, and just lost interest in some scenes or came up with the kinds of silly ideas that one does come up with under the influence of mind-altering drugs. There’s a scene in which the lunatics tie up one of the female teachers. It seems like it’s a setup for a kinky bondage scene. And what do the lunatics do to her? Nothing. They just forget all about her.

At one point the lunatics are holding ten schoolgirls hostage in the gym. They then force the girls to engage in a degrading and humiliating experience. The girls are forced to perform a chorus line number from a Busby Berkeley musical.

At another point they have two girls at their mercy. You just know what dangerous escaped sex offenders will do in such a situation. Instead of which the girls are forced to do some mud-wrestling. With each other. 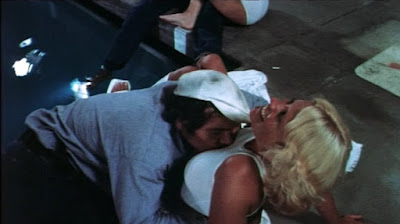 This is a movie that veers between being a thriller, a teen sex comedy and a slapstick comedy. It’s problem as a thriller is that the three escaped asylum inmates are obviously not very dangerous. They’re pretty non-violent. We never really think the schoolgirls are in much danger. In fact when two of the lunatics had ten of the girls lined up in the gym I felt a bit sorry for the lunatics. The girls had been doing their karate class. It seemed pretty obvious that ten girls with martial arts training would have no trouble dealing with two unarmed guys. And this is a reform school. These are tough aggressive girls. I figured that as soon as the girls got seriously annoyed they would beat the two guys to a pulp. Which is what happened.

This is really a drive-in movie rather than a sexploitation movie. The sex scenes are very very tame and there’s only a modest amount of nudity. There are however lots and lots of panty shots and lots of bouncing boobies (these naughty delinquent girls express their rebelliousness by refusing to wear bras).

Sexploitation fans will recognise Sharon Kelly, star of such sexploitation classics as The Dirty Mind of Young Sally and Teenage Bride (a movie which features not a single teenager nor a single bride).

As a comedy Delinquent Schoolgirls is a total wash-out. The humour is infantile and obvious and excruciating. As a sex film it’s pretty tame, although there are quite a few naked breasts. As a bizarre cinematic oddity it has a certain appeal.
Posted by dfordoom at 23:24