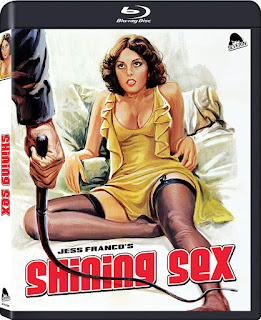 Shining Sex really is a weird movie, even by Franco standards. It’s one of his two science fiction movies (the other being the gloriously insane The Sex Is Crazy from 1981).

This is one of Franco’s Eurociné releases.

In any case Cynthia decides to introduce the obviously slightly nervous and uptight woman to the joys of sapphic sex.

The woman (we will later discover that her name is Alpha) then takes a kind of lotion or gel and spreads it on Cynthia’s lady parts, with fairly spectacular results.

By some kind of telepathic means Dr Seward (Jess Franco) becomes aware of what is happening to Cynthia. Dr Seward runs a private psychiatric clinic. Dr Seward of course was a character in Bram Stoker’s Dracula. Is this movie a kind of riff on Dracula? It’s possible.

Cynthia turns to Madame Pécame (Monica Swinn) for help. Madame Pécame believes that Cynthia has been in contact with her enemy. Her enemy is the woman known as Alpha. Perhaps Madame Pécame can help Cynthia. Perhaps Cynthia will cause Madame Pécame’s death. That gel that Alpha smeared over Cynthia’s body has some interesting effects. Cynthia’s vagina is now a deadly weapon. The gel also seems to have the effect of enslaving Cynthia.

We gradually realise that Alpha is not human. We will eventually learn that she is an alien being from another dimension. She wants to study us. But she’s concerned that we may learn of her existence and then we might study her. She deals with the problem by eliminating people who get too close to the truth. And she now has an effective killing machine. If Cynthia seduces somebody then she loves them to death, literally. And Cynthia can seduce anyone she wants to seduce. She’s that kind of girl. Cynthia doesn’t want to kill people but her will is no longer her own.

I don’t want to waste too much time on the plot because there really is very little actual plot.

This movie reminds me quite a bit of Female Vampire. Cynthia, like Countess Irina Karlstein in Female Vampire, destroys her victims through sex but is herself a slave to her sexual desires. And Countess Irina, like Cynthia, has little choice. Fate has made both women instruments of death.

I think Alpha can be seen as an alien sex vampire. Cynthia, like Lucy Westenra in Dracula, is both innocent victim and monster. Of course I may be reading too much into the choice of the name Dr Seward. There are several Dr Sewards in Franco’s films. I do think there is an element of vampirism here but you have to remember that Franco’s preference was for vampires who use desire as a weapon, rather than fangs. The protagonist in Doriana Grey (which I regard as Franco’s masterpiece) can be seen as to some extent vampiric. Maybe sexual desire is always potentially vampiric.

Much has been made of Franco’s voyeurism but as Stephen Thrower quite rightly points out what makes Franco’s voyeurism so interesting is the way it intersects with Lina Romay’s exhibitionism. Romay’s exhibitionism is in hyper-drive in this movie and in Shining Sex it’s the exhibitionist not the voyeur who is the active partner. Romay’s sexual abandon and her willingness to display her naked body makes her the exhibitionist as devouring tigress. She makes all men, and all women, into voyeurs. It’s another extraordinary performance by this extraordinary actress. Lina Romay in this movie is sex as the source of all power, of all destruction. She is sex as a force of nature, sex as a typhoon or an earthquake that overwhelms everything in its path. Nobody but Lina Romay could have played this rôle.

The movie also seriously questions the idea of voyeurism as a manifestation of male power. Faced with female exhibitionism and female sexual power as embodied by Lina Romay the male is in fact powerless.

Shining Sex is hypnotic and fascinating. Apart from Alpha’s alienness there are hints of the paranormal and of all kinds of hidden powers. It’s a Franco film that no serious Franco fan should overlook.

Severin have released Shining Sex on DVD and Blu-Ray, with an incredible wealth of worthwhile extras. There’s an audio commentary featuring Robert Monell, there’s another instalment of Stephen Thrower’s documentary series on Franco’s locations (and the locations used in this movie are a perfect example of Franco’s genius for finding locations which will cost him almost nothing but look stunning and mesmerising), there’s Stephen Thrower again with an in-depth analysis of the film, there’s an interview with producer Daniel Lesoeur, an interview with sound editor Gérard Kikoïne, an excellent appreciation of Franco’s work by film-maker Christophe Gans and there are some NSFW (very very not safe for work) outtakes from the hardcore version. Severin really have done a magnificent job here.

Shining Sex is a weird one, but it’s fascinatingly weird and it’s highly recommended.