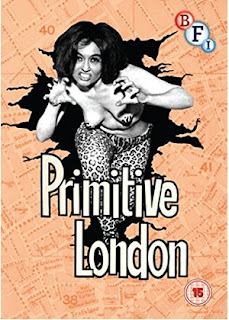 The Italian mondo films of the early 60s (starting with Mondo Cane) were hugely popular and triggered off a rash of similar films. Arnold L. Miller enjoyed considerable success with London in the Raw in 1964, a kind of mondo film looking at the sleazy side of London. He followed it up with Primitive London in 1965.

Primitive London is very much a mondo film. It’s like an anthropological tour of the English capital, focusing on the strange customs of the natives. There’s a strip club, then a school for strippers. Then we get a topless fashion show, with topless evening dresses and topless bathing costumes.

The range of topics covered is bewildering, from women’s judo to hairdressing, from tattooing to Turkish baths, from beauty contests to prostitution to the most exclusive hatters in London.

Youth subcultures get quite a bit of attention. Mods, rockers and beatniks. I was surprised there were still beatniks in 1965 although many of them look like proto-hippies. In 1965 there was ongoing hysteria in the British press about violence between mods and rockers with both subcultures being regarded as dangerous and frightening. 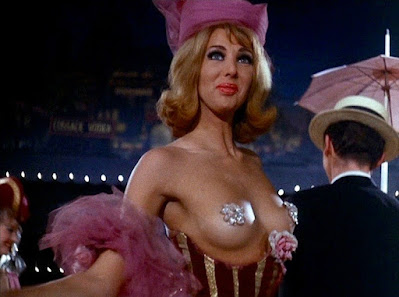 There are also chickens and goldfish undergoing emergency surgery.

We learn that pinball machines are a symptom of social degradation.

The movie fearlessly confronts the greatest social evil of all, stand-up comedy.

And of course there is a key party. Wife-swapping was a popular subject for exploitation film-makers and writers of sleaze fiction and you could easily get the impression that it was a craze sweeping the western world.

The general tone is moralising and disapproving. As every exploitation film-maker from the 1930s to the 1970s knew, the moral disapproval was an essential ingredient. It was essential to keep the censors at bay, but it also made for sensationalism and sensationalism is what these films were all about. The moralising served the purpose of making what was often rather tame material seem shocking and exciting. It made the viewer feel delightfully naughty and daring. 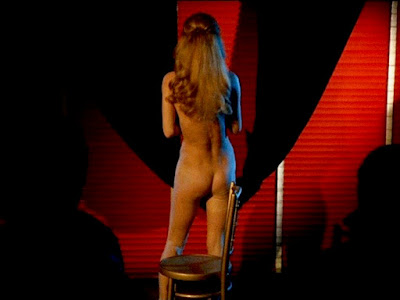 And then, for no reason whatsoever, we get a re-enactment of the Jack the Ripper murders.

Mondo movies were not supposed to make sense. The whole point was to throw as many bizarre ingredients into the pot as possible. That’s the approach taken here. If you’re bored by a particular segment don’t worry, within a couple of minutes the movie will have moved on to something different and totally unrelated. And you have to keep watching because you have no idea what will come next. 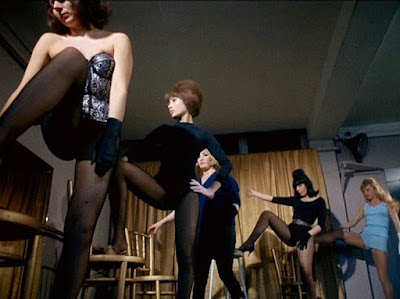 Another attraction of mondo movies of course is that you never know exactly how much is real and how much is fake.

There’s an attempt to inject some humour into the proceedings with an ongoing sketch about a television commercial and with the producer and editing arguing over what should be included in the movie.

The main attraction of this movie is the glimpse it offers into the seedy glamorous world of Soho strip clubs in the mid-60s. It’s obvious that some (possibly most) of the strip-tease routines are real but it’s likely they were toned way down for the movie. Or perhaps not. Given the oppressive atmosphere of the time and the restrictiveness of British laws in the 60s maybe this really was all they could get away with. It’s still fascinating.

Arnold L. Miller was also responsible for West End Jungle and went to to make Secrets of a Windmill Girl.

Stanley A. Long, who did the cinematography, went on to direct sex comedies in the 70s. 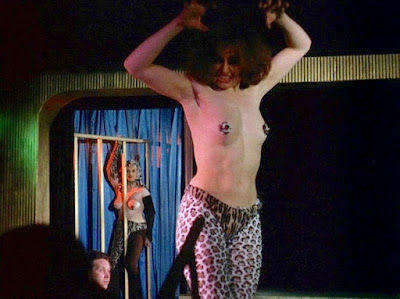 The BFI have done a great job with the DVD release (and they’ve released this one on Blu-Ray as well). Image quality is superb.

The extras are in some ways even more interesting than the main feature. There are three interviews from the late 60s. Nightclub owner Al Burnett explains in detail the intricacies and inanities of British licensing and gambling laws. Nightclub owner Stuart McCabe has some fascinating things to say about the stupidities of British laws governing prostitution and gives us his views on how a strip club should be run honestly and with a bit of class. Stripper Shirley gives us some insights into the motivations of the stripper. Finally there’s a 26-minute short film by John Irvin, Carousella, about the lives of three strippers. It’s both surprisingly sympathetic and well-made.

Primitive London is oddly fascinating and I recommend it although obviously you have to like this type of cinematic oddity.

London in the Raw is worth a look as well.