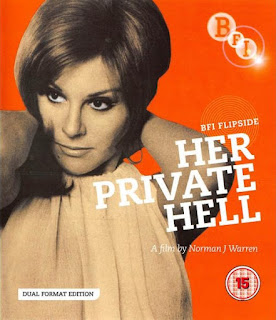 Her Private Hell is a 1968 British sexploitation movie. Given the rigidity of British censorship at the time it’s unbelievably tame although the US release was slightly racier.

The movie has been described as Britain’s first sex feature film. It’s incredibly how tame it is when you consider the sex comedies that the British film industry would start turning out within a couple of years.

Her Private Hell was a huge hit at the time.

Marisa (Lucia Mudogno) is an Italian girl who arrives in London in pursuit of a modelling career. She is led to believe that she is going to become a top fashion model but then she is asked if she is willing to take her clothes off for some nude shots.

She signed up to model for a fashion magazine run by Neville, a guy who manages to be bad-tempered, irritable, controlling, creepy and sleazy in a genteel way.

Supposedly to keep her under wraps from other photographers who might seek to lure her away she is moved into Bernie’s flat, Bernie being the photographer she’s going to be working with. Pretty soon Maria and Bernie end up in bed together. 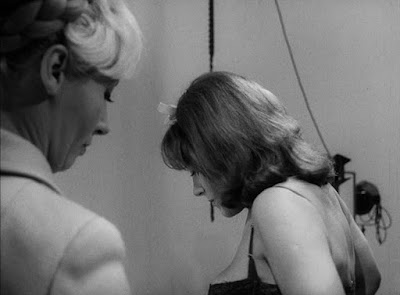 There are two other girls living in the flat and they’re not pleased about Marisa’s arrival.

One problem with this movie is that right at the start when Bernie wants to do some nude shots Marisa is quite agreeable. When the magazine’s other photographer, Matt, wants her to pose nude she is delighted. In both cases there’s not the slightest suggestion that she was coerced. And then later on when one of the pictures is published in a magazine she is shocked and outraged, and says she feels dirty. If she felt that way about posing nude why was she so relaxed about it initially? And if you pose for nude photos for a couple of magazine photographers how could you be surprised if they end up appearing in a magazine? This is the problem with Marisa as a character. She’s either incredibly dumb or her behaviour is bizarre and contradictory suggesting she might be crazy. But if she’s crazy she’s crazy in an irritating way, not an interesting way.

I could imagine a model who was starting to make a name for herself as a fashion model being a bit embarrassed about having her photos in a girlie magazine but her reaction, for 1968, seems over-the-top and melodramatic. And contrived. The plot requires her to be shocked and outraged, so she’s shocked and outraged. We get to see the photo, and it’s really just a girlie magazine photo. It’s not like she was tricked into doing hardcore porn. I can buy the idea that a woman in 1968 would be horrified by the idea of having her photo in a girlie magazine but she posed for the photos quite voluntarily.

And that’s the whole of the plot. Marisa thinks her whole life has been ruined and decides she has to escape from these wicked perverts. 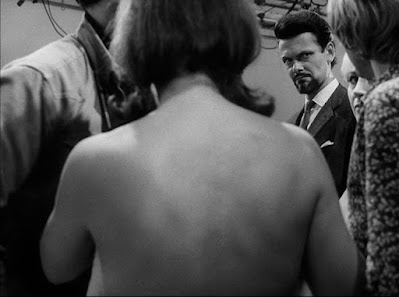 British sexploitation movies of this era often come across as more risqué versions of the dreary kitchen sink dramas so beloved of British film critics in the early to mid 60s. They can be very slow moving and seriously lacking in actual sexploitation elements. They also had a tendency to take themselves much too seriously. Her Private Hell at least has the glamorous modelling background and some good modernist sets to liven things up a bit. It’s a movie that looks terrific.

In both the US and Britain there were countless sexploitation movies dealing with the sad fate of innocent young girls who dream of becoming models only to find out that what they’ve signed up for is nude modelling. The American sexploitation movies take wildly varying approaches to the subject matter, with the tones ranging from humorous to tragic to melodramatic to totally bizarre and insane. This British effort seems to operate on the assumption that taking her clothes off for a magazine is just about the most awful fate that could ever befall a woman. If that happens to a woman her life is basically over. 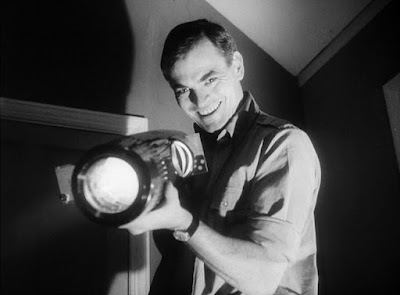 Lucia Mudogno’s performance never really works. She just doesn’t get a handle on the part and her confused performance makes Marisa less sympathetic. The other performances are generally quite good.

Despite a minuscule budget this is a professionally made movie which looks quite impressive. It captures the Swinging London vibe. The decor, the hairstyles, the clothes, all have a wonderful time capsule quality.

Director Norman J. Warren would go on to make cult favourites such as Prey, Satan’s Slave and Inseminoid. But Her Private Hell was his first feature and it was a commercial success for which he was always grateful. 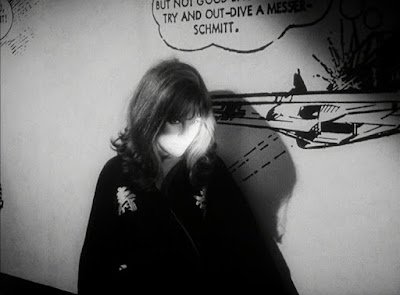 This is the tamest sexploitation movie ever made. There are a few brief topless scenes and that’s it. Even this was too much for the British censors. They decided that society would collapse if British cinema-goers got to see women’s breasts, so those scenes were cut (but remained in the US cut). With those scenes cut the movie is just a contrived melodrama. To be brutally honest this movie needed some nudity because it doesn’t have much else going for it.

The most interesting thing about the movie is the glimpse it gives into an era in which increasing sexual freedom and freedom of speech were coming up against the stubborn resistance of the morals police. Like a lot of exploitation movies this one has a generally disapproving tone, even though it was from a commercial point of view successfully riding the wave of growing sexual freedom. It’s a fine example of our society’s desperate determination to avoid taking a grown-up view of sex, a determination which is as strong today as it was in 1968. So, despite its major flaws and its tameness, it’s of some historical interest.
As usual the BFI have packed both the Blu-Ray and DVD (it’s a combo pack) with extras. The most interesting is a 1971 documentary on nude modelling which gives us a glimpse of a number of Penthouse photoshoots (and lots and lots of nudity). Actual nude models were interviewed and they talk about how much fun they’re having and how much they enjoy posing nude. It’s refreshing after the dismal and oppressive moral panic tone of Her Private Hell.
Posted by dfordoom at 17:03