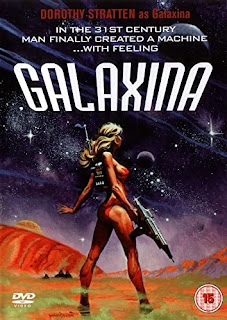 Galaxina is a 1980 science fiction movie that is perhaps best known as being one of the movies former Playboy Playmate Dorothy Stratten made before she was tragically murdered at the age of twenty.

Galaxina itself is very 80s. It’s obviously intended to be a sci-fi spoof. The humour is very 80s, which you’ll either enjoy or you won’t.

A thousand years in the future the police space cruiser Infinity is on a routine patrol. The crew’s main problem is boredom. There’s also the problem that the crew is entirely male, except for Galaxina. Galaxina (Dorothy Stratten) is a robot that looks exactly like a gorgeous young woman. She’s also quite relaxed but showing off her feminine charms. When she serves dinner she wears an incredibly skimpy French maid’s outfit with a skirt so short that it offers a tempting view of her lacy panties. You can well imagine what every member of the crew would like to do to her but they can’t. They can’t even touch her. If they do they get a severe electrical shock. So they have to share the spacecraft with an untouchable sexy blonde babe.

So as you might expect there’s a slightly tense atmosphere on board the Infinity.

The Infinity receives orders to head for a distant planet. The voyage will take twenty-seven years so the crew is put into cryosleep. Galaxina is left in charge of the ship.

She doesn’t have much to do except think, and she thinks about one thing only. She wants to be just like a human woman. She wants experience what real women experience. She wants love. When the crew visits a space brothel Galaxina starts to cry. She has needs as well, both physical and emotional.

And she has twenty-seven years to think about Sergeant Thor. She decides that he’s the man for her.

An unfortunate encounter with an alien spacecraft after they reach their destination leaves the Infinity crippled on the surface of the planet. Galaxina is sent off to the nearest town to find help. The town is like something out of the Wild West but with aliens. The saloon has human heads mounted on the wall as trophies. It’s a rough town.

So Galaxina is a sort of western spoof as well as a sci-fi spoof.

A problem that becomes evident early on is the pacing. It’s just rather slow.

William Sachs wrote and directed the movie. His script just doesn’t the sparkle or the wit needed for a successful spoof. The tone is not quite right. The idea was fine. In fact it’s a good idea - a female robot that decides it wants to be a real woman. Galaxina’s story is the most interesting part of the movie and had potential to be either an offbeat romance, an intelligent speculations of what makes us human, or even a sex comedy. But Galaxina’s quest to be a woman isn’t really pursued in enough depth to provide either food for thought, laughs or titillation.

The space brothel scenes and the alien saloon scenes are amusing, but just not quite amusing enough.

It’s also a movie that should have been sexier than it is. If you’re going to make a movie about a hot robot space babe you need to sex things up just a little.

The special effects and miniatures work are both adequate, especially for what was clearly a low budget movie. The sets are quite good. The movie doesn’t really excessively cheap.

Galaxina is obviously just a little reminiscent of John Carpenter’s Dark Star, which also depicted lengthy space missions as nightmares of boredom and futility. The Infinity is not quite as grotty and squalid as the spaceship in Carpenter’s movie but we do get the impression that it’s a fairly old ship and perhaps not in the best of repair.

It’s difficult to judge Dorothy Stratten’s performance. She is after all playing a robot, and a robot that cannot talk, so she can’t be blamed for not showing any emotions. Galaxina doesn’t have any emotions. She certainly looks good.

Galaxina is silly and goofy and amusing and that’s fine, that’s the kind of movie it’s supposed to be, but it’s just not quite amusing enough. It’s by no means as terrible as its reputation would suggest. It’s just a beer and popcorn movie. If you have plenty of popcorn and a lot of beer there are worse ways of spending an hour and a half.