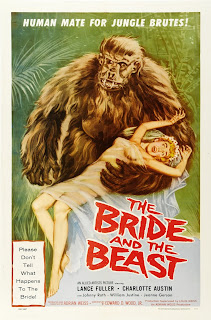 The Bride and the Beast was scripted by Ed Wood and that today is its main selling point. The movies that Wood actually directed are absolutely terrible (although fascinating and entertaining in their own way). On the other hand an Ed Wood script in the hands of a relatively competent director could produce extremely interesting results, the girl juvenile delinquent classic The Violent Years (1956) being a prime example. As a director Wood didn’t have a clue. As a scriptwriter he was pretty good, if you like movies that are weird, fun, totally incoherent and sexually perverse.

Laura (Charlotte Austin) and Dan (Lance Fuller) have just been married and they’re off to Dan’s isolated but palatial house. He’s sent the servants home so they can be alone together. Well, alone except for Spanky.

Spanky is Dan’s pet gorilla. He keeps Spanky caged in the cellar. Laura naturally wants to meet Spanky. It’s obvious that Laura and the gorilla find each other pretty interesting. Spanky has probably never seen a woman before, and he seems to like what he sees. Laura is fascinated by the gorilla, and perhaps just a tiny bit excited.
Maybe she's even a tiny bit sexually excited. 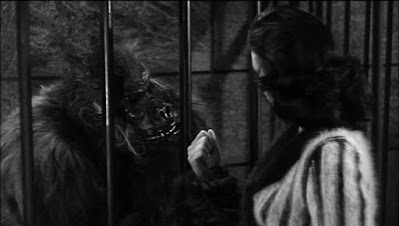 The gorilla gets loose and then we get a great scene in which he comes up behind Laura and lifts up the back of her nightie. This seems to get him very excited and he then rips off her nightie completely. This is too much for Dan. He goes for his gun.

As a result of this incident Dan decides that Laura needs to see a friend of his, a psychiatrist. Dr Reiner is an unconventional psychiatrist who thinks that the secrets to our problems lie in our past lives.

Dr Reiner decides to regress Laura to one of her past lives, with startling results. 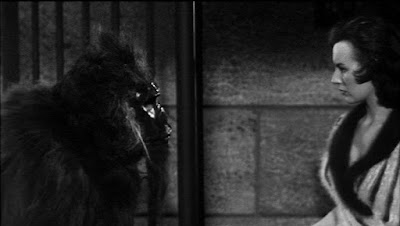 It seems that in one of her past lives Laura was a lady gorilla. Dan is sceptical but Dr Reiner is a scientist after all.

You’d think that if you find out that your wife was once a gorilla you might think twice about taking her into the African jungle, but Dan is a big game hunter and he’s sure that Laura will love it.

Thanks to the miracle of stock footage the action switches to Africa.

The local authorities need Dan’s help desperately. They have two man-eating tigers to deal with. Yes, I know, tigers don’t live in Africa but the movie deals with that - these are tigers that escaped from a wrecked cargo ship. 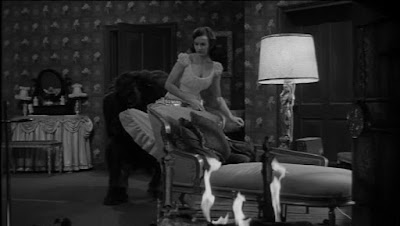 After Dan and his gun-bearers have fired about a hundred rounds of ammunition at the tigers without hitting them once I found myself losing faith in Dan’s prowess as a big game hunter.

Worse is to follow. Laura decides to take a walk in the jungle, on her own. And yes, you guessed it, she runs into some gorillas. At this point what was already a bizarre movie becomes really bizarre in a manner that only Ed Wood could have managed.

It’s obviously a bad movie and structurally it’s a complete mess. The tiger hunt sub-plot is irrelevant and it goes on and on. But the first and last quarters are full of prime Ed Wood weirdness and lunacy. And the ending is, well you’ll just have to watch it. 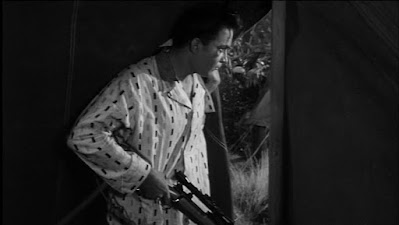 The great thing about the movies that were written by Ed Wood but directed by others is that they end up being totally Ed Wood movies, except that they’re technically competent. They’re loaded to overflowing with Ed Wood’s many and varied obsessions. In this case there’s even an angora sweater reference (Ed loved angora sweaters). This movie has Wood’s fingerprints all over it. And the Ed Wood weirdness really does make this one worth watching. Recommended.
Posted by dfordoom at 17:11